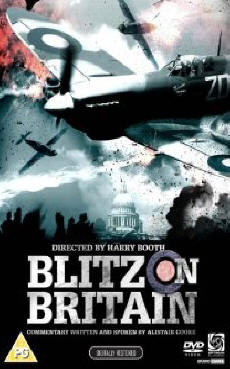 If you enjoy sitting on Grandad’s knee listening to tales of the war, then pull up a pew for 68 minutes, watch this rerelease of Harry Booth’s classic British documentary Blitz on Britain (1960), and prepare to be uplifted, surprised and informed about the Nazi “Blitzkrieg” that near-levelled entire towns and cities, yet at the same time brought a whole nation together during the Second World War.

If you need dramatised sentimentality, melodrama and grown men emitting massive amounts of tears, blood, gore and guts to relay the tragedy and destruction of WWII, then feel free to fulfil your needs elsewhere with an American blockbuster such as Saving Private Ryan (1998), The English Patient (1996) or Sophie’s Choice (1982). However, be prepared to be lead into believing that America won the war single handedly.
What I love most about British films in general, but in particular the British films that depict the Second World War, is their sense of realism, pride and dignity. Booth’s Blitz on Britain is no exception. Made in 1960, it still somehow reflects all the spirit and intention of the British propaganda films made during the height of the war such as London Can Take It (1940), The Heart of Britain (1941), How to Dig (1941) and Listen to Britain (1942), to name but a few. 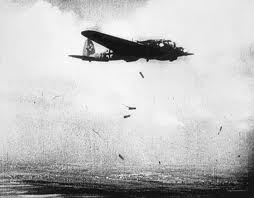 The absolute pride and determination demonstrated by the British people -and documented within Blitz on Britain – is truly inspiring. Their homes and places of work had been literally obliterated, yet they went about their business the next morning, finding alternative ways to adjust to their now-hazardous daily routines. People quickly realised that the London Underground represented a safe-haven where they could more effectively protect themselves from the nightly bombings. Once the idea caught on, many citizens would sleep within the Underground system, with bars and nightly entertainment hastily installed in order to entertain the masses. Throughout, the people of Britain are shown as being almost permanently on-guard. In one scene, a couple stroll along a beach in their 1940s swim suit attire, complete with socks and sandals yet also sporting protective tin helmets.

Blitz on Britain is superbly narrated by the late Alistair Cooke, offering an informative yet inspiring tone to proceedings. In a truly British show of defiance in the face of adversity, humour is injected into the people’s day to day lives; at one point the camera shows a montage of hand written signs found around the city with gleaming citizens next to them, happy and proud to have survived the night. One such sign in a shop window simply reads “J. Winkle – Window Cleaner. Business as usual. If you’ve got no windows, will clean chimneys”.

Blitz on Britain serves as an excellent educational artefact for those wishing to learn not just about Britain’s survival during the Blitzkrieg, but also British documentary’s development during the 1960s, which would later give rise to the revolutionary ‘Free Cinema’ movement. A must-see for historians and film students alike.