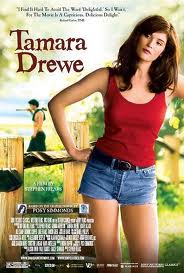 Your opinion towards the 19th century novelist and poet Thomas Hardy will, more likely than not, largely determine your reaction to Brit director Stephen Frears’ latest film, Tamara Drewe (2010). For some, Hardy was one of the greatest literary figures of all time, producing classic texts, including The Return of the Native and Jude the Obscure, during his remarkable career. For others, the mere reference of his name evokes strong, suppressed feelings of agitation and boredom, with a vague recollection of whimsical nonsense and mundane fumblings amongst the heath…enter Tamara Drewe.

Adapted from Guardian cartoonist Posy Simmonds’ graphic novel of the same name – itself a “loose” adaptation of Hardy’s Far from the Madding Crowd, – Tamara Drewe stars British Actress Gemma Arterton as the titular Ms Drewe, a highly successful, London-based journalist who returns home to the sleepy Dorset village of Ewedown after the death of her mother. In keeping with both Simmonds’ graphic novel and Hardy’s source text, Tamara finds herself at the centre of a suitor love triangle, consisting of thriller writer/serial philander Nicholas Hardiment (Frears regular Roger Allam), indie drummer Ben Sergeant (Dominic Cooper) and local ‘yokel’ Andy Cobb (Luke Evans), who she dated as a teenager. But will the film’s heroine make the right choice about who is the right man for her? 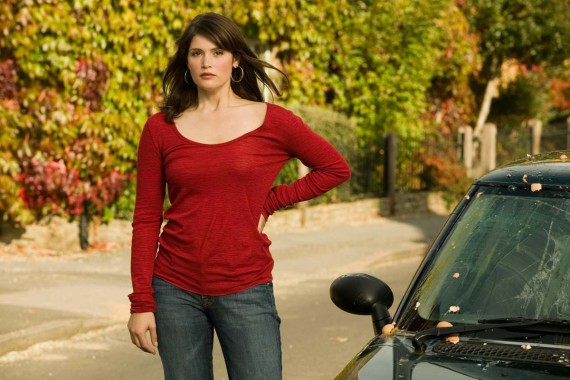 Ultimately, you don’t have to be a devout ‘Hardyphile’ to see how this particular narrative will tie itself up. Will the girl pick the untrustworthy lothario, the vain, superficial musician or the down-to-earth local boy? Answers on a postcard etc. etc. Unfortunately, Tamara Drewe’s narrative predictability is the very least of its problems. The film marks the first foray into the comedy genre for Frears, the director responsible for works such as the social-realist drama My Beautiful Laundrette (1985) and the Oscar-nominated The Queen (2006), and it is only when his latest film is compared to his past triumphs that its numerous failings become so apparent.

Frears appears to go out of his way to push the concepts of stereotypical British “whimsy” and serendipitous farce to their absolute limit, to the point where an audience would be duly forgiven for thinking they were being forced to endure the latest flimsy toff-fest from industry luvvy Richard Curtis. Frears has stated that Tamara Drewe is his attempt to rectify the fact that “the English don’t make films about the middle classes”, a statement that is hard to dismiss given the country’s infatuation with gritty gangster dramas and “social issue” films. However, the inhabitants of Ewedown (with the exception of Mr. Hardiment, Glen and the impressive Tamsin Greig as Hardiment’s long suffering wife, Beth) are all almost as two dimensional as Simmonds’ original illustrations.

Arterton is almost entirely unsympathetic as the film’s promiscuous protagonist, changing partners almost as regularly as her nasal coverings. Her romantic interests are just as flat; Mamma Mia! (2008) star Cooper’s indie rocker impression is initially amusing, yet his one-note performance quickly begins to grate, and Evan’s good, honest farmhand Andy goes missing for large portions of the film, reappearing with the odd derogatory comment about Londoners before fading back into anonymity.

A step (or should that be genre) too far for the once-versatile Frears, Tamara Drewe’s self-proclamations of having blended ‘intelligent’ British humour with black comedy slowly fritters away as the film plods towards its abrupt and wholly unsatisfactory ending. For somewhat more successful attempts at blending British wit with melancholy and tragedy, see Mike Leigh’s Happy Go Lucky (2008) or Ken Loach’s Looking for Eric (2009). For Frears at his best, simply rent a copy of My Beautiful Laundrette.