Certified Copy is the first of Abbas Kiarostami’s features to be filmed outside his native Iran. He is renowned for his use of non-professional actors, but here he employs the considerable talents of Juliette Binoche (winner of the Best Actress award at this year’s Cannes Film Festival) to work alongside British opera-singer William Shimmel, in his first straight acting role. It also marks Kiarostami’s return to narrative film making.

The film follows English author James Miller, who is in a small village in southern Tuscany for the launch of his book about art originals and copies. The next day he meets Binoche’s nameless French gallery owner (and apparently a fan), who suggests driving him to a neighbouring village for some sightseeing. His only proviso is that he has to be back by 9pm in the evening. 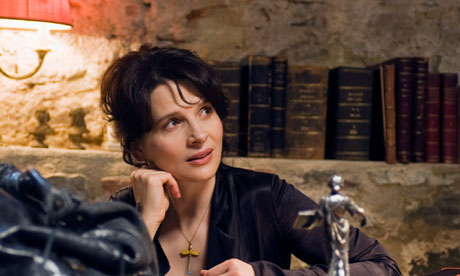 Throughout, the pair discuss the various merits of originals and copies, the genuine and the fake. Miller argues that copies can be as good as an original work of art: “What’s important is not the work, but how we look at it.”  Later their discourse on authenticity shifts from art to life. Around half way through Certified Copy, it becomes clear that the two have known each other for some time and may even already be married.

Kiarostami’s trademarks in style are all here. Beautifully framed shots slow everything down; there is a beautifully long, single take of his characters in their car, the town’s architecture reflected in its windscreen. During the drive, the camera remains trained on the pair, only occasionally cutting away. One shot takes in a long row of cypresses to illustrate Miller’s point about their uniqueness – no two trees are ever alike.

Playing with notions of the cinematic gaze, Kiarostami carefully manipulates reflections. Often his characters’ images are replicated in a window or mirror or they are filmed looking through glass. At one point they are in a gallery and Miller steps behind a glass presentation case to better observe a painting (in fact, it’s a forgery). It is only when staring directly into the camera that Binoche’s lead becomes truly animated as she flirts with the lens.

It’s all pure Kiarostami, but Certified Copy is also supremely European, serving as an antidote to the clichéd Hollywood romance. The lush Tuscan landscape takes second place to the man and woman and their story. The camera lingers on their faces and bodies and, as their personal drama unfolds, the picturesque surroundings fade into the background.

The pair begin to argue like man and wife. Haunted by memories of a happier time, Binoche’s character complains that Miller has become wedded to his work and is continuously absent. “The problem is that you don’t notice me”, she accuses him. Miller, meanwhile, can barely recall any of the significant places and moments from their past. He finds it impossible to make a meaningful gesture until a stranger in the plaza takes him aside and advises him to offer his nameless love his arm. Tentatively, he obliges. 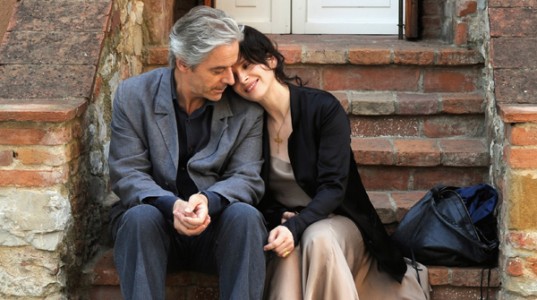 Binoche’s performance captures to perfection the frayed nerves of a woman on the verge of menopause – all girlish excitement one minute, bitter, brittle irritation the next. Shimmell too is superb at conveying Miller’s vanity and self-absorption every time he runs his fingers through his hair. Kiarostami teases out gender distinctions – how differently men and women think and function – and the resultant observations are often very funny.

Ironically, they are surrounded by newly-weds as young couples flock to this particular village to take their vows. It’s a perfect setting for the film’s themes. Human relationships change and mature in stark contrast to these old, Italian villages, where time seems to stand still. Miller argues that a marriage can be just as good as it was originally, if not better. What’s important is how you look at it. But Certified Copy is also a film about absence – when love lacks physical intimacy it can only ever be a pale imitation of the real thing.