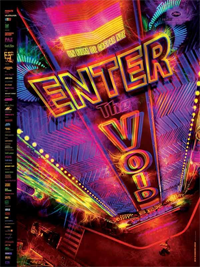 The proclaimed enfant terrible of new French Cinema, Gaspar Noé, returned to screens this month with Enter the Void (2010), the controversial director’s first feature length release since the hugely disturbing, nightmarish Irréversible (2002). The latter film is undoubtedly best remembered – or more likely revered – for two unflinching scenes of extreme graphic violence, rather than its inventive use of perspective, chronology and sound design, which was perhaps unfortunately overlooked.

However, with Enter the Void, Noé’s incredible stylistic vision is allowed to come to the fore, successfully exceeding the aesthetic benchmarks set in his previous work, whilst at the same time unapologetically continuing to penetrate and explore the deepest, darkest impulses and desires humanity has to offer.

Described by Noé as a “psychedelic melodrama”, Enter the Void begins through the literal eyes of Oscar (Nathanial Brown). Oscar’s a small time drug dealer, whilst his younger sister Linda (Paz de la Huerta) works as a nightclub stripper. One night, Oscar is caught up in a police bust and shot. As he lies dying, his spirit, faithful to the promise he made his sister – that he would never abandon her – refuses to abandon the world of the living. As his spirit wanders through the city, Oscar’s visions growing evermore distorted, evermore nightmarish, past, present and future all merge in a hallucinatory maelstrom.

The first thing to say about Enter the Void is just how incredible the film looks. Forget Avatar (2009): this is the type of film that cinemas were built to exhibit. On arriving at the screening I attended, you couldn’t help but feel some sense of anticipation (and also trepidation) at the signs warning of possible seizures and potential epileptic fits to those susceptible. Enter the Void’s opening credit sequence alone – a series of high contrast, flashing, neon-esque names and attributions, frantically flashing across the screen whilst accompanied by pounding techno – certainly lived up to all expectations. 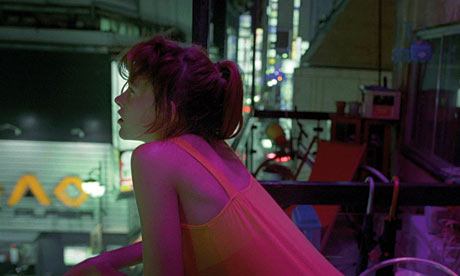 This first person, P.O.V perspective continues up to the point of Oscar’s shooting, but Noé’s stylistic vision never falters. Modern day Tokyo has never been captured so vividly, with the fluorescent illuminations of the metropolis’ bustling bars and clubs pulsating like those of a giant cuttlefish. It quickly became almost impossible to think of another film with such a distinctive and unique aesthetic, apart from – as others have already suggested – Stanley Kubrick’s visual feast 2001: A Space Odyssey (1968).

Of course there is a narrative of sorts that runs alongside Noé’s swirling collage and, contrary to some recent criticism directed at the film, performances are perfectly fine and functional, with newcomer Cyril Roy excelling in particular as the philosophising chain smoker-with-a-heart, Alex. However, Enter the Void does suffer from being overly long, with the cinematic release thankfully cut down from the original 163 minute edit premiered at the 2009 Cannes Film Festival. The film also (intentionally) lacks the tightness and drive of Irréversible, which becomes apparent when you consider that the UK and US release of the film are missing an entire reel (reel seven of nine, to be precise), without the narrative appearing to suffer from any obvious plot holes.

Whilst Enter the Void certainly suffers from the types of flaws that have plagued nearly all of the most ambitious and auteurist cinematic experiments in film history, Noé’s unique vision is no less spectacular or mentally/physically affecting. Like Irréversible, Enter the Void will stay with you long after you leave the cinema and in an age of increasingly available, disposable visual ‘entertainment’, this achievement has to be roundly applauded.