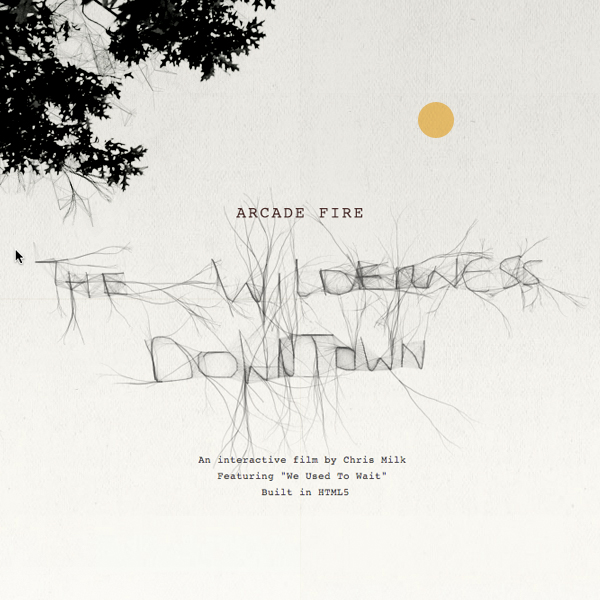 Two days after their storming headline set at this year’s Reading Festival, Canadian rock troupe Arcade Fire released a short, interactive online video for their track We Used to Wait, taken from their acclaimed third album, The Suburbs. Directed by Chris Milk, whose previous collaborations have included musical behemoths U2, Kanye West and the late, great Johnny Cash, the short film – entitled The Wilderness Downtown – perfectly captures the track’s melancholic nostalgic pining for a childhood lost. But what really makes the piece stand out is the fact that the lost childhood so mournfully remembered in the track is your own; in other words, you are the star of the film.

Through a creative partnership with Google Chrome and the new HTML 5 platform (put simply, the tool that dictates how web pages and online content is displayed), director Milk has been able to integrate striking, multi-screen footage of a faceless figure racing down the streets of his hometown with real life images of the viewer’s own neighbourhood, courtesy of Google Maps. Seeing still images of the modest little council house you grew up in intertwined with the film’s glossy, stylish visuals can be jarring and, more often than not, downright funny. However, the potential for future, feature length interactive works is clear to see. Who would dream of rejecting the opportunity to manipulate and/or alter an entire movie, from the relatively obvious e.g. location, period etc, to the devilishly complex, such as narrative and plot. What’s more, The Wilderness Downtown is just one of the new vanguards of interactive film to have hit the web over the last month.

Also currently doing the rounds is Tipp-Ex’s hugely successful interactive YouTube promo The Hunter Shoots a Bear – created by Parisian ad agency Buzzman – where viewers are able to interpose the verb ‘shoots’ with…well, whatever they wish. Obviously there are logistical limits to the amount of possible vignettes that can be chosen (a personal highlight has to be ‘The Hunter mates with a Bear’ – bestiality as a marketing tool? Tipp-Ex, what were you thinking!), but with over 50 separate scenes shot for the promo, its replay value and longevity is far and above the majority of YouTube’s other content; 8 million-plus viewers can’t be wrong.

So what’s the big deal? Well, if one short YouTube promo can suddenly push a near forgotten brand such as Tipp-Ex to the forefront of the online community’s hip list and beyond, imagine the commercial possibilities for future brand awareness and product placement in more substantial, theatrical releases.

Advertising and product placement within films has been seen time and again. Simply watch one of the more recent entries in the James Bond franchise and sit back as you’re bombarded by product placement for Nokia phones, Rolexes and Aston Martins. But what if you were given the opportunity to truly interact with the next James Bond film (if it ever emerges from the depths of production limbo, that is)? Imagine watching Bond as he finds himself helplessly stuck in yet another one of his near fatal scenarios; the on-screen action slows or freezes completely, and the audience is asked to vote (via handset, smart phone etc) for which branded gadget they’d like see Bond use in order to escape. Being force-fed a product on-screen is one thing: actually having a say in when and where the product will be utilized – and in what capacity – dramatically changes your relationship with it.

This brave new world may not be as far off as you might think. 1966 saw the release of Czech film-maker Radúz Cincera’s Kinautomat, viewed by many as the first interactive film. At nine points during theatrical screenings, the film paused and a moderator would ask the somewhat perplexed audiences to vote for which one of two potential proceeding scenes they would like to watch – each offering a different narrative direction – despite the film’s predetermined ending. The film received favourable reviews from Western critics and Hollywood were poised to take advantage of the technology, but were prevented by the Czechoslovakian Communist government who deemed viewed Kinautomat and its unique concept as state property. In addition, the 2007 Toronto Film Festival saw the world premiere of Late Fragment, North America’s first – yet unfortunately flawed – interactive effort. 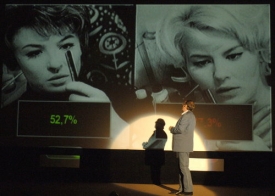 Other, more physical forms of interactive cinema are already becoming well established. The success of Future Cinema’s Secret Cinema events – where screenings of cult and classic movies are embellished with theatrical set pieces, themed locations and – has helped to prove that there is a growing appetite for more audience-orientated cinematic experiences. You only had to be one of the 15,000 Bedouin warriors that descended upon London’s Alexandra Palace for Secret Cinema’s screening of David Lean’s epic Lawrence of Arabia (1962) earlier this month to get a real sense of the buzz and excitement currently surrounding this, and similar ‘pop-up’ interactive events. When was the last time you truly felt that sense of anticipation and excitement when faced with the prospect of queuing up for your extortionate ticket (plus additional, often pointless 3D specs) at your local multiplex?

In the right hands, Kinautomat’s build-your-own-narrative format could potentially lead to some spectacular results. I don’t think there would be a cinemagoer alive right now that would baulk at the merest rumour of a future Chris Nolan interactive brain-twister. But there’s still the over-riding fear that, as with the recent 3D reboot, future ‘customisable’ films could be sabotaged by: a) gimmicky overuse from some of the film industries less imaginative filmmakers and/or b) the complete and utter plundering of the new format by the PR and marketing industries. As the film industry becomes evermore profit orientated, ad agencies are constantly looking for the next big cultural bandwagon to hitch a ride upon. Even Secret Cinema’s original ‘guerilla’ image has been somewhat tarnished by accusations of overpriced food stalls and explicit, intrusive advertising for the event’s new corporate sponsors, Windows Phone.

Whilst the organizers behind Secret Cinema can be forgiven for making a bit of cash from advertising fees at events due to their relative newcomer status, Hollywood’s head honchos would be wise to ere on the side of caution before splattering any future interactive release with vogue brands and overt product placement; the more you ask an audience to engage with what they are watching, the less likely they are to be susceptible to the type of subtle brainwashing that has been seen in the past.