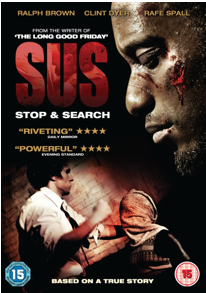 It is election night, 3 May 1979, and police officer Karn (Ralph Brown) is confident that Margaret Thatcher will win a landslide victory. An innocent black man, Leon Delroy (Clint Dyer), is brought in for interrogation, accused of murdering his pregnant wife who died after suffering a massive haemorrhage. Karn and his thuggish sidekick, Officer Wilby (Rafe Spall), set about extracting a confession as they wait to greet “the new dawn” under “Thatch”.

The controversial “Sus” law, after which Robert Heath’s 2010 film was titled, allowed the police to stop, search and arrest on suspicion alone and was perceived by its detractors as a means of targeting black and ethnic minority communities. Not surprisingly, the resultant misuse of power generated huge resentment in Britain and the law was finally abolished (ironically under Thatcher) following nationwide race riots in 1980. 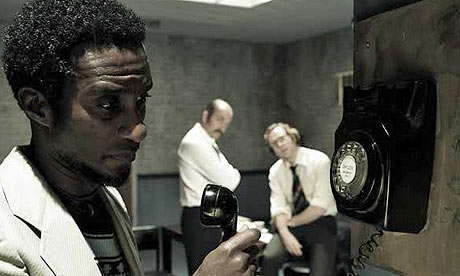 Perhaps best known for penning the London gangster classic (and soon to be remade) The Long Good Friday (1980), writer Barrie Keeffe originally wrote Sus (2010) as a stage play, yet even then it felt like the kind of crime drama best suited to television. Adapting it for the big screen 30 years later, Keeffe’s work has lost none of its edge and the film’s release on DVD is particularly timely given David Cameron’s threats to bring back similar Sus laws. But the subject matter, single setting, small cast and overall feel of the film is reminiscent of the popular Play for Today TV series of the same period.

The action takes place in an interrogation room, bleached of colour, reflecting the stark subject matter. The director Heath’s largely static camera work gives a sense of dislocation and claustrophobia, and allows for successive stages of tension to build up over the 90 minute running time. The frequent close-ups emphasise the intensity of the interrogation; it’s the sort of camerawork that relies on strong performances from the three central actors, and they certainly don’t disappoint.

Dyer is superb as Delroy, conveying a wide emotional register from disbelief and frustration to horror and grief. Brown and Spall are also superb as the two racist officers whose casual violence and ritual humiliation of their victim are chillingly believable.

Sus is a small-scale, modest film but, together with some powerful character moments, it tackles some significantly grandiose issues. As well as decrying past institutionalised racism, Sus covers other themes of equality, civil rights and racial harmony. Given Britain’s extreme counter-terrorism measures of recent years, sadly these remain all too pertinent.