If you want to make a horror movie, start with a good idea from which to develop your script – something which is uncanny, creepy, or downright terrifying (added points if this something is rumoured to have happened in real life). Brett Anstey’s Dawned by Dawn (2009) has a very good central idea to start with: that of the Banshee, the screaming spirit from Irish mythology whose piercing wails signal when someone is about to die.

Next, add a spooky location (in Damned by Dawn’s case, an old house in the middle of miles of desolated countryside), populate it with some strange locals (a very old lady on the verge of death) and a set of unknowing protagonists who’ll be led straight to their deaths by their own naivete and/or lack of common sense, and everything is set for your story to unfold. 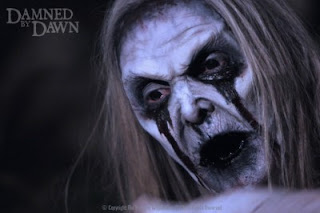 This, unfortunately, is exactly where Damned by Dawn falters. In general, the first half an hour is entertaining and eerie enough to catch the viewer’s attention, showing protagonist Claire (Renee Willner) as she introduces boyfriend Paul (Danny Alder) to her family. Her parents’ house is old, the surrounding woods ominous and Claire also has an eerie-looking Nana (Dawn Klingberg) who is bedridden and well aware that her time is nearly up.

Nana tells Claire that the mysterious “Lady of Sorrows” will come to take her away, and that she is not to be interfered with for any reason. When the Lady comes, the whole family is awoken by her piercing screams and a horrified Claire decides that she won’t let her grandmother go without a fight, pushing her off the balcony to her apparent “death”. But Claire has interfered with an ancient tradition, Nana can’t join her ancestors, and the Banshee is now after the blood of every last member of the family.

Damned by Dawn’s make-up and overall design work is relatively impressive – with both working together to build up an initially eerie atmosphere – yet the film is sabotaged by some (non-intentionally) comical creatures, the main characters’ nonsensical behaviour and some very tedious scenes during which the music is the only thing keeping us vaguely interested.

Director Brett Anstey’s heart is clearly in the right place and his passion shows. It’s just a shame about the flying skeletons…