It turns out Paul Greengrass’s penchant for telling stories of amnesiacs and the tribulations of war began life long before the Bourne cycle and Green Zone (2010). Released on DVD for the first time, Resurrected (1989), Greengrass’ debut feature film, tells the story of Private Kevin Deakin (David Thewlis), a soldier who goes missing in battle during the1982 Falklands War.

Although presumed dead, Deakin walks the desolate island landscape until he is finally discovered hungry and disorientated, seven weeks after the war’s end. Contrary to the inevitable relief and joy this news brings to his family back home, his Lazarus-like return is met with an ambivalent response from his army superiors, as they immediately suspect him of desertion. Deakin insists that after rushing to the aid of a fellow soldier, a nearby shell explosion knocked him unconscious and subsequently rendered him powerless to remember his actions shortly after coming round. Despite all charges against him being dropped at a (somewhat dubious looking) enquiry, Deakin’s life is never the same again: not only does he suffer from the inner turmoil caused by the brutality of the battlefield, but his peers and eventually even his family suspect he is not telling the entire truth about the circumstances of his disappearance. 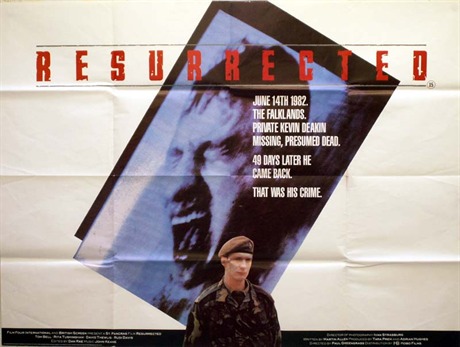 Greengrass himself has called this an “immature” piece: indeed, its pace is incomparable to the mighty acceleration and tension building of his signature blockbuster style. A labouring first half means that the plot doesn’t seem to gain any real impetus until the latter part of the film, where the focus on institutionalised bullying finally comes into play.

All too often Resurrected attempts to present two multi-faceted topics but fails to do justice to either: the post-traumatic stress induced by the trauma of war as soldiers are haunted by images of dead comrades, and the abhorrent culture of victimisation present within army ranks. Given that there are films and TV dramas which deal with both of these issues much more comprehensively (most recently Frankie’s Story, part of Barry McGovern’s recent BBC series Accused), Resurrected seems rather unsatisfying in comparison. Though loosely based on a true story, the character of Deakin is merely a sketch, and seems to lack the true psychological depth of a person ostracised from his community and attacked by his colleagues.

Nevertheless, Resurrected does offer an intriguing insight into the direction one of the UK’s most successful Hollywood exports. The handheld camera work of the more intense and evocative scenes reveal glimpses of Greengrass’s hallmark documentary-like style in the making. Although some may find this approach slightly tiresome (if a bit nauseating) in Greengrass’s most successful movies, the more calculated use of shakier shots in Resurrected actually provide the film with the pace it needs, heightening the gritty, realist tone, whilst serving to maintain sensitivity towards the subject matter throughout. As well as being Greengrass’s first foray into the world of filmmaking, Resurrected was also David Thewlis’s big screen debut: as Deakin, Thewlis brings great scope to the role despite the rather limited character development offered up by Martin Hall’s script.

If it’s full throttle action sequences you’re after, perhaps give Resurrected a miss. However, perhaps the film’s strongest appeal derives from the insight into Greengrass’s early experimentation with turning semi-fictionalised stories into thought-provoking cinematic pieces.

The Resurrected DVD comes with some interesting special features, including retrospective interviews with Paul Greengrass and David Thewlis.