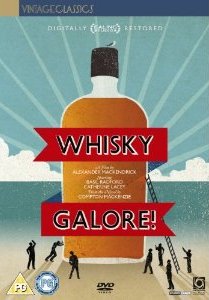 With Alec Guinness duo The Lavender Hill Mob (1951) and The Ladykillers (1955) fronting Ealing Studio’s DVD rerelease list its easy to forget Whisky Galore!, Alexander Mackendrick’s first film and the one that helped put the company on the map back in 1949.

Based on the true story of a shipwreck that sank with 50,000 cases of whisky on the coast of the Outer Hebrides, Whisky Galore! tells the story of a small villages attempts to seize the cargo having run out of whisky in the run up to World War II. With the relentless efforts of the Home Guard Captain (the fantastically stuffy Basil Radford) to uphold the law and prevent the shipment from being stolen, the villagers are forced into finding inventive new ways to steal the whisky and bring some much needed Dutch courage to the town.

Whisky Galore!’s comedy is far drier than the likes of Kind Hearts and Coronets (1949) whose dark and often cruel sense of humour made for a very bleak outlook on human nature. Instead Whisky Galore!’s cheery wit offers a more genial perspective of its characters, encapsulating Hebridean life and painting a wonderfully off-kilter image of the inhabitants. 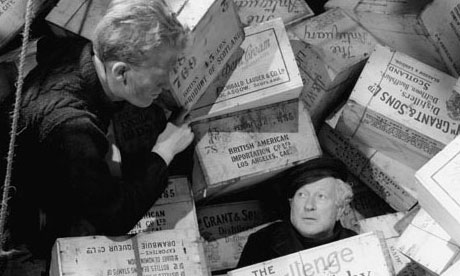 With an enormous focus on gossip and romance in the town its no wonder that the villagers have such a dependency on whisky. Their stories are the heart of the film and the efforts to which they go to steal the cargo from under the nose of the Home Guard are hilarious and marvelously told, giving great emotional depth to the film.

That said, Whisky Galore! never becomes too serious or farcical, straddling the two to its advantage, unlike some of Ealing Studios’ later films. Although many Ealing films center around characters and personalities too, none do it quite so well as Whisky Galore! whose sabbath-abiding villagers are great to revisit.

In the days of VHS, Whisky Galore! was always one of the hardest of the Ealing comedies to track down and once you did so the poor quality of the film was no great payoff. The effort put into the studio’s restoration is immediately apparent and both the image and sound are incredibly clear. The deserved care received by the film makes it well worth buying, even if you already have an older copy of the film, and it’s heightened further by a fantastic ‘making of’ feature that gives plenty of detail into the tricky process of making the film.

Whisky Galore! is a great reminder of just how good English comedies used to be and is a good introduction point to anyone unfamiliar with Ealing Studios’ films. Having spent much of its life in the shadow of The Lavender Hill Mob and Kind Hearts and Coronets, this series of restorations gives Whisky Galore! the opportunity to open up to bigger audiences and finally get the attention it deserves.