Woody Allen’s continued underlying flirtation with fantastical situations – previously witnessed with the screen-fleeing charm of The Purple Rose of Cairo (1985) and hypnotism-induced antics of The Curse of the Jade Scorpion (2001) – returns once again within Midnight in Paris (2011), the seasoned auteur’s forty-first directed feature in so many years, and stars Owen Wilson, Rachel McAdams, Kathy Bates and ‘First Lady’ of France, Carla Bruni-Sarkozy.

Returning full time to the rose-tinted streets of Paris, after partially alighting there twice previously in Love and Death (1975) and Everyone Says I Love You (1996), Allen’s touristy representation of the city of lights bears a similar resemblance to the narrative it is pinned to; a prosperous American couple tagging along on a family business trip the French capital and experiencing more than just rooftop wine tastings and tours of the Musée Rodin.

Just as his ode to New York City in Manhattan (1979) threw us head-first into a giddy montage of stark black and white panoramic shots, cut to the grandiose patter of Gershwin’s Rhapsody in Blue, here Allen spoils us with an idyllic, if slightly bushed opening celebration of all things Parisian, brimming with joie de vivre as it shifts from the Tuileries Gardens to Monet’s Giverny and, of course, the Eiffel Tower, easing us in to what can easily be described as a love letter to this picture perfect city. 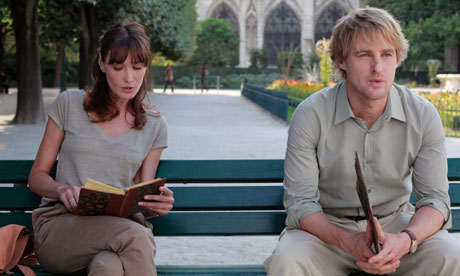 Whereas London posed as a background shift to visually, but unsuccessfully, mask lacklustre material four times over; Scoop (2006) and Cassandra’s Dream (2007) being two damp examples, Paris serves as refreshing, welcome inspiration, a gear shift for a director whose weathered career is jolted back to life, matching bouncy dialogue and a whimsically comical plot with the glossy climes of the sepia toned city of love.

Paris, bathing in the warm glow of Darius Khondji’s cinematography and Cole Porter tunes is here very much a character in the same vein Allen’s beloved New York has been in a multitude of prior films, and it is accompanied by a wealth of talent who channel and bring to life their fictional, and in some cases non-fictional characters; in particular Adrien Brody’s larger than life Salvador Dalí and Corey Stoll’s verbose Ernest Hemingway, constantly chugging from the wine bottle.

Yet, it is Owen Wilson, reminding us that for every Hall Pass (2011) and vacant canine caper he is still some semblance of a watchable actor, who excels as the giddy, wide-eyed Allen cipher Gil, and is perhaps the director’s most convincing synonym since his prolonged on-screen absence, though he has written himself into next year’s The Bop Decameron (2012).

If jet-setting to European locales that reward his low-key, shifting auteurist stature with reputable box office returns is what it takes to get Allen back in the groove, then so be it. Despite it being somewhat of a subjective cliché to label his latest effort as a return to form, Midnight in Paris is definitely Woody Allen firing on all cylinders.