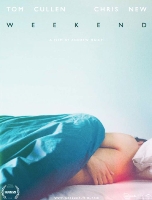 Andrew Haigh’s sensitive romance Weekend (2011) – which premiered in the UK last month at the BFI London Film Festival – sees two men meet in a nightclub and form a burgeoning bond that becomes intensely intimate over a period of 48 hours.

Russell (Tom Cullen) is a timid homosexual, who’s recently come out to his friends but doesn’t talk much about his love life. He’s the complete opposite to Glen (Chris New), who shouts about naked men in leather boots in a pub – and then has a go at anyone who doesn’t like it. They’re two contrasting responses to society’s treatment of gay culture that mark out Haigh’s movie as both daringly different and instantly familiar.

Culllen and New’s chemistry is spot-on throughout. Struggling to voice their own feelings – let alone discuss wider issues – the two newcomers naturally play off each other without straying from the subtle, nuanced script. Haigh shoots events almost as a documentary, shirking overly fancy shots to snuggle up against the lovers as they negotiate their way through the awkward discoveries of a new affair.

Every note in Weekend rings true, from Russell’s embarrassed dissection of their first meeting, speaking into Glen’s dictaphone, to the tender, but frank, sex scenes that are withheld until later in the relationship.

It’s a simple account of a fledgling couple, made more immediate by the complete lack of music. Weekend is full of the raw mundanity of everyday life, but tinged with a hopeful optimism that really moves. It’s Richard Linklater’s Before Sunrise (1995) – but with two blokes – in Nottingham. A superb slice of contemporary British cinema from an hugely talented filmmaker.