Winner of the Special Jury Prize at this year’s Sundance Film Festival, director Mike Cahill’s celestial cinematic voyage Another Earth (2011) is a fantastic example of how science fiction should be used – transcending the spectacle associated with the genre in search of something more metaphysical, whilst commendably remaining firmly based in the roots of human behaviour.

Rhonda (Brit Marling) is an exceptional student, fascinated with space exploration and about to attend M.I.T (Massachusetts Institute of Technology). However, after a night celebrating her acceptance into this prestigious school, she naively decides to drive home whilst under the influence. Intoxicated and exhausted, her attention is sparked by the announcement over the car radio about the sighting of a mysterious new planet, purported to have a life sustaining atmosphere much like our own. Whilst Rhonda peers through the windscreen in search of this remarkable discovery she takes her eyes of the road – resulting in a devastating car crash with a composer (John, played by William Mapother) in which his young wife and child are killed.

Four years later Rhonda is released from prison and this elusive planet has been inventively renamed Earth 2 – due to its striking resemblance to our own planet. Despite coming back home, she’s thrust into a world which seems completely foreign to her. Her life has dramatically changed and instead of looking towards a bright and exciting future, Rhonda’s now plagued by her past with that one life changing incident replacing her dreams with thoughts of guilt and remorse. Her path soon leads her back to John, and whilst she is clearly aware of whom he is, he has no idea that Rhonda was the one responsible for the devastating incident which destroyed his family (due to her crime being committed whilst she was still a minor, her details were withheld from public knowledge). 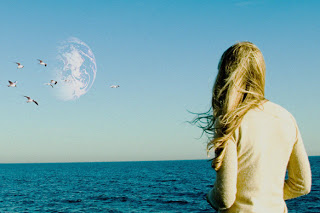 Another Earth is an impressively haunting tale of loss set against the backdrop of a new world which draws parallels with Lars von Trier’s Melancholia (2011) (which used the ominous presence of a foreign object in the night sky to represent the crippling effects of depression). Successfully channelling issues of mortality, fate and the existential questions we use to attain atonement, Cahill’s film uses a clear correspondence between its looming astral body and Rhonda’s quandary to probe the meanings of choice, and in turn, redemption.

Marling caused something of a stir at Sundance and SXSW (where she not only stared in but co-wrote both Another Earth and Sound of my Voice – due out early 2012) and whilst watching Another Earth it becomes instantly apparent why. Her screen presence is totally captivating, perfectly capturing her characters crippling remorse whilst expelling an assured degree of intellect necessary for her character’s narrative arc to progress. Combined with Mapother’s sobering, subtle performance, the pair create a rich, intimate chemistry which compels the audience to connect to these two lost souls, quelling the scientific implausibility of the plot and diluting the film’s centrepiece of Earth 2.

Whilst for some Another Earth may fail in reaching the elevated stratosphere of ideas its high concept script is reaching for, considering its meagre budget and cast of relative unknown actors, Cahill’s film is an exceptional piece of independent science fiction which richly deserves the high praise it’s already been receiving.