Professing to shed some cinematic light on the ‘Yellow Belt’ oil disputes of the early 20th century, Jean-Jacques Annaud’s Black Gold (2011) presented a fantastic opportunity for the construction of a complex, sweeping Arabian epic not seen since David Lean’s 1962 masterpiece Lawrence of Arabia. Sadly, what we get instead is a stultifyingly stupid, mind-numbing farce – featuring some of the worst dialogue you will hear this, or any year.

Annaud’s latest focuses upon Auda (A Prophet’s Tahar Rahim), one of two Salmaah princes bestowed upon Nesib, the Emir of Hobeika (Antonio Banderas), as a guarantee of peace by their father (and Nesib’s fierce rival) Amar (Mark Strong). Under Nesib’s watchful eye, Auda and his fearless brother Saleeh (Akin Gazi) mature into upstanding young men, but when a Texan oil tycoon (Corey Johnson) comes to the Emir with offerings of unimaginable riches for the right to drill on the disputed no-man’s land known as the ‘Yellow Belt’, the tenuous peace treaty between Hobeika and Salmaah comes under threat once again. 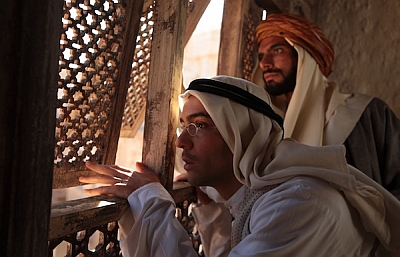 Those anticipating an informed, sophisticated political drama exploring the history of the Arab world’s multi-faceted relationship with oil should avoid Black Gold at all costs – as should those looking to gain anything at all from this dense, laborious drama. Annaud paints every single character and faction with the very broadest of brush strokes, leaving no room for ambiguity or development – the Americans greedy, the sporadic tribes simple, yet ultimately untrustworthy.

The film’s complete lack of subtlety is further compounded by an abysmal script, offering up some of the worst dialogue in recent memory. On their wedding night, Auda’s new bride Princess Leyla (daughter of Nesib, played by Freida Pinto) explains that in privacy the two can finally drop their veil, before promptly doing just that. It’s also a shame to see British rising star Riz Ahmed given most of the dregs as a wise-cracking, forward-thinking physician – equipped with an inexplicable South African twang. That said, neither Banderas, Strong or Pinto can come out of the film with head held high.

Black Gold is as poorly-conceived and shallow as any Hollywood ‘epic’ you will see this year, entirely devoid of any insight, tension or style. Annaud has produced a fanciful fairytale of how the Arab oil industry came to be, seemingly with visions of unattainable Lean-esque grandeur. Instead, the French director has left us with a lame camel, begging to be taken out into the desert and shot.