French director Bruno Dumont, winner of the Grand Jury Prize at both the 1999 and 2009 Cannes Film Festival for his films L’humanité and Flanders, returns with his latest slowburning offering Hadewijch (2009), starring the remarkably talented Julie Sokolowski.

Céline (Julie Sokolowski) is an extremely devout theology student living in a convent, nicknamed ‘Hadewijch’ by the nuns after the 13th century Christian mystic and poet because of her unwavering devotion to God. Céline’s obsessive religious practices soon come to the attention of the Mother Superior, who decides that Céline must leave the convent and gain more knowledge of the outside world. Forced to retreat to her parent’s bourgeois home in Paris and distressed by the Church’s rejection of her, Céline finds solace in a group of Muslim extremists who convince her of their plight. 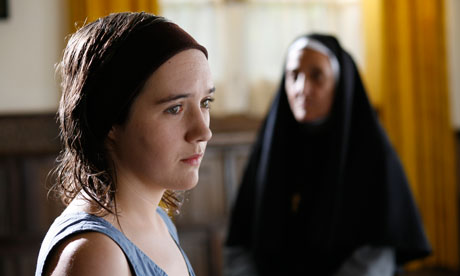 Dumont’s absorbing cinematography depicting Céline at prayer resonate with piety without ever being sanctimonious, drawing the audience into this world of religious extremism. Such a method of intimate filming is well chosen as it successfully captures and reflects the film’s spiritual themes aided, even further by Dumont’s choice of static shots and close-ups. A great deal of the film’s strength lies in the exceptionally convincing performance by Sokolwski, made all the more remarkable by the fact this is her first film.

Céline’s character acts as a catalyst for Dumont’s thesis on religious extremism, which whilst interesting fails to completely captivate due to its lumbering pace. Yet Hadewijch’s greatest failing is that it does not afford the time to Islamic extremism as it does to Christianity, resulting in a garbled, one-dimensional depiction of Islam that could potentially come across as ignorant and incendiary.

Hadewijch is a slow and at times difficult watch, yet despite the film’s significant issues, Dumont’s latest remains a powerful example of visual French cinema, bordering on both the exceptional and the pretentious.