Few directors have been derided by critics as much as This Means War (2012) helmsman McG. They justifiably gave the man a kicking for the below par Charlie’s Angels (2000) and it’s godforsaken sequel Charlie’s Angels: Full Throttle (2003). Yet although Terminator Salvation (2009) was no oil painting, the call from some quarters to subject him to death by a thousand paper cuts was perhaps a wee bit harsh.

The trailer for This Means War didn’t bode well and for the first 15 minutes or so, most viewers may be expecting a train wreck. The carnage begins with CIA agents Tuck (Tom Hardy) and FDR Foster (Chris Pine) exchanging bullets with some bad guys on the roof of a Hong Kong skyscraper. Hardy looks bewildered and uncomfortable, like a man who’s suddenly sobered up and realised what he’s gotten himself into. The action is limp, the effects are flaccid and as opening sequences go, it’s one of the worst in living memory. 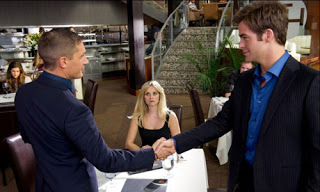 Time rolls by, the boys are banished to the office due to their oriental escapade and Tuck – out of boredom more than anything – decides to join an online dating agency. Who should turn up but business women Lauren (Reese Witherspoon), who succumbs to Tuck’s charms and then bumps into Foster – and consequently also succumbs to his charms. Lo and behold, both find out they are dating the same woman and then embark on a quest to sabotage each others’ love lives. It sounds terrible and for a while, it is. In fact, if it wasn’t for Chelsea Handler’s fabulously filthy-mouthed turn as Lauren’s sister Trish, This Means War might have been slipped beyond redemption.

Amazingly, things pick up – Hardy looks more comfortable, Pine is effortlessly smooth and the chemistry between the pair begins to sparkle. Add to that a great soundtrack and some more Handler magic and all but the most miserable viewer will be suitably entertained. As for McG, he doesn’t really bring anything to table and his direction is pretty uninspiring – the action sequences are poor and his blushes are saved by a witty script and some charismatic actors.

This Means War may not be the highlight of Tom Hardy or Chris Pine’s careers so far, but it’s a fun and forgettable holiday romance to bridge the gap until the business of Christopher Nolan’s The Dark Knight Rises (2012) and J. J. Abrams’ as-yet untitled 2013 Star Trek sequel gets underway.