If asked to name an Irish comedy from 2011, John Michael McDonagh’s debut feature The Guard, starring Brendan Gleeson, would spring to most people’s minds. Lesser-known Irish offering Sensation (2010) also hit our screens last year, starring Gleeson’s son Domhnall Gleeson in the lead role. Whilst Sensation lacks the punch of The Guard in comparison and takes a while to get going, once writer (and director) Tom Hall’s witty script is brought out by the fine, fresh cast of talent, his own debut becomes a rewarding watch.

26-year-old Donal (Gleeson) lives on his father’s farm in rural Tipperary, leading a seemingly mundane existence until he discovers his father’s dead body and becomes the sole heir to the estate. His new found wealth provides libidinous Donal with the means to invite Kim, or ‘Courtney’ (Luanne Gordon), a Kiwi call girl sourced from an escort agency, over for the ‘Girlfriend Package’. It’s upon his first encounter with Kim that we see his awkwardness and inexperience with women and as their ‘relationship’ develops, Donal’s interest in Kim exposes two lonely souls in the pair. When Kim confesses her desire to start her own escort business, Donal offers to invest and the two start an agency. It’s here the situation becomes messy, as Kim experiences the backlash of the jealous male, and Donal, the unfriendly arm of the law. 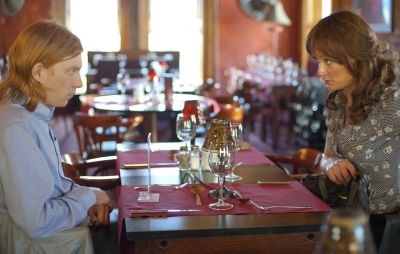 Gleeson exhibits an instinctive sense of comic timing that could well have been inherited from Gleeson Sr. as his deadpan delivery and and subtleties in his expressions show a great understanding for the style of script. As Donal’s character grows in confidence, Gleeson’s manner and body language develop into a more mature man, but he manages to maintain a sense of naivety which endears Donal to the audience.

Gordon is also well-cast as Kim, managing to portray a hidden fragility under a hardened exterior, and the two share a believable chemistry between a very odd coupling. The mismatch in character doesn’t really work but it isn’t meant to anyway, which is quite a bold move on writer Hall’s part, even more so considering he deliberately writes flawed, often unlikeable characters whose motives you continually question (particularly in Kim’s case).

Whilst Sensation draws a fair few laughs thanks to Hall’s bleak but amusing view of Irish sexuality, it takes a little good faith to get there, as it’s not an instantly engaging film. It’s to Gleeson’s credit that he manages to maintain interest, as something lies beneath the surface of his character that means you want to know more. The same can be said for Patrick Ryan’s portrayal of Karl, Donal’s so-called friend whose influence is uneasy, but we’re not quite sure why.

Films like The Guard are great examples of movies that can reach international audiences with an innate and specific sense of national character but one can’t see Sensation enjoying worldwide attention. However, Hall’s direction, particularly of the cameras, coupled with his distinctive sense of humour and unconventional personalities, will surely enjoy more localised success. Gleeson, as a lead role in Sensation after playing smaller parts in Harry Potter and Never Let Me Go (2010), will undoubtedly have a bright future ahead of him.