The directorial debut of Mélanie Laurent, star of Beginners (2010) and Quentin Tarantino’s 2009 Nazi romp Inglourious Basterds, The Adopted (Les Adoptés, 2011) sees the alluring French actress adapt her own screenplay for the big screen. Whilst displaying a keen eye for character-based drama and visual direction, Laurent’s film falls foul of the kind of self-conscious quirks that befall many projects of a similar ilk.

Laurent plays Lisa, a doting single mother who has a deep-seated bond with sister Marine (Marie Denarnaud), adopted into Lisa’s family when she was just 10-years-old. Almost inseparable, the two women, along with mother Millie (Clémentine Célarié) and Lisa’s adorably precocious son Leo (Théodore Maquet-Foucher) form a devoted makeshift family who face all of life’s hardships together. However, Lisa’s idealised familial construction is ruptured when Marine – an intellectual bookshop worker – quickly falls in love with Alex (Basterds co-star Denis Menochet), putting into motion a chain of events that leads to tragedy. 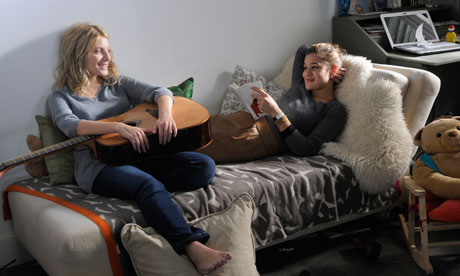 Largely unoriginal, the story Laurent has concocted contains very few surprises as it flits from one schmaltzy scene to the next, relying on a certain level of visual efficiency in order to tell its tale of blossoming love and unwavering devotion. Laurent is a strong dramatic actress, yet she seems to have underwritten her own character, bookending the film with her singing on stage yet giving herself little to stretch her vivacious talents with within the core of the film.

Effectively told in two titled parts – with the first (‘Marine’) exploring that character in question’s relationship with Alex, and the second (‘Lisa’) detailing how Lisa and her family cope when Marine becomes comatose after a road accident – The Adopted coasts along on its knowing charm, with Laurent displaying her understanding of the tropes of relationship dramas and kooky independent cinema. Although this is no bad thing, with the film offering many tasteful, sweet and sometimes touching moments, it quickly starts to amount to very little as it builds to an unintentionally humorous, not to mention overly-saccharine, conclusion.

This underwhelming denouement is largely down to Laurent’s lack of focus, with certain elements of the story and the characters within it rarely given enough time to fully develop in order for the audience to form any emotional attachments. For instance, the tumultuous, whirlwind romance that blossoms between Marine and Alex is matched by its minimal depiction within the film. Seen through numerous sequences of glossy montage – wherein the two share baths, make passionate love and wax lyrical about their hopes and aspirations – their relationship isn’t dwelt on enough to create much in the way of poignancy once devastation eventually strikes.

Though not without its merits, particularly Laurent’s clear proficiency in regards to blending humour with poignant performances, The Adopted rarely offers anything emotionally coherent, presenting a mildly diverting slice of cinematic whimsy that marries fine acting with flavourless storytelling.