It’s a story almost as old as time itself… no not Snow White, but rather never taking a trailer on face value. Tarsem Singh’s re-imagining, Mirror Mirror (2012) (one of two interpretations of this famous fairy tale due for release this year – the other being Rupert Sanders’ Snow White and the Huntsman), belies its cringe-inducing promotion to become one of this year’s must charming family films.

Singh’s high gloss adaptation is set in a kingdom ensnared in the clutches of greed and vanity. The Queen’s (Julia Roberts) rule has turned this quaint province into a gloomy, poverty stricken community where nobody sings or dances any more. For fear of being outdone by the picturesque princess of the former king Snow White (Lily Collins), the Queen banishes her to an isolated chamber in the recesses of her lavish palace. However, on her 18th birthday, Snow White manages to sneak out and is shocked to see the extent of which this once joyous kingdom has descended into abject poverty. 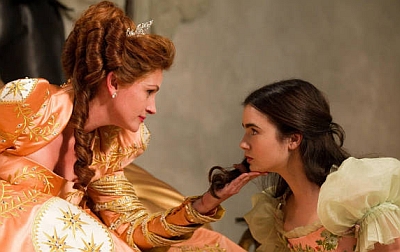 The arrival of a young chiseled prince (Armie Hammer) offers her hope of a new future and the possibility of taking her rightful place on the throne. However, the Queen has different plans and using a concoction of black magic and a sense of fear which she uses to control the locals, she banishes Snow White to the treacherous forests which surround the palace. All seems lost until the introduction of a rag tag team of minute renegades help teach Snow White how to defend herself and stand up for what she believes.

A hefty dose of poetic licence and Singh’s lush visual aesthetics combine with some deft pantomime style humour to create a family film designed to entertain both young and old in equal measure. Admittedly the jokes are very hit and miss however, Mirror Mirror manages to find the right balance of comedy, never succumbing to the cheap adult in-jokes which began to over saturate the later Shrek movies.

Joining the ranks of films such as Enchanted (2007), Stardust (2007) and The Brothers Grimm (2005) which attempted to capture the magic of the much cherished The Princess Bride (1987), Singh’s tongue in cheek take on the fairy tale dynamic is commendable for creating something equally whimsical and magical. However it’s the performance of Roberts which gives the film’s saccharine sweet façade the much needed bite it requires. She reveals in the pomp and wickedness of the role and whilst Collins is little more than a pretty face on a one dimensional character it’s refreshing to see a film with two such empowered female leads.

It’s hard to tell whether Mirror Mirror’s achievements are overly amplified by the gutter low expectations evoked by its hideously camp trailer – however, what remains is a gloriously well made family friendly adventure with an abundance of charm.