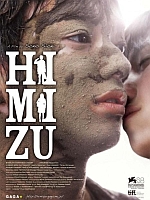 Sion Sono, the acclaimed director of Cold Fish (2010) and Love Exposure (2008), returns this week his latest offering Himizu (2011). The film is a deeply personal and intense cinematic reaction to the Japanese earthquake and corresponding tsunami of 2011 which sadly lead to the nuclear meltdown of the Fukushima power plant – single-handedly throwing the country into state of moral panic.

Despite being constantly reminded of the devastating events at Fukushima through a myriad of incredibly vivid nightmares, Sumida (Shota Shometani) refuses to buy into the spirit fostering mantra of his teachers who want him to feel like a flower blossoming up through the upheaval. Instead he focuses his energy on rebuilding his family’s boat renting business – content with living an ordinary life and singularly fighting against the crushing events which befell his community. His class mate Keiko (Fumi Nikaido) certainly doesn’t see Sumida as ‘ordinary’ and slowly becomes besotted with this rebellious, wayward student -even though her heavy handed advances are constantly rejected by Sumida. However, when the threat of real violence threatens to destroy all of Sumida’s hard work, his chances of living an ordinary life quickly vanish, leading him into a downward spiral of vicious attacks on the area’s morally corrupt, all in an attempt to create a better society. 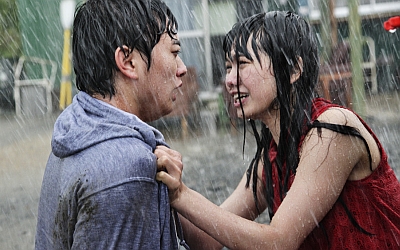 Nowhere near as violent as Cold Fish or as ‘out-there’ as Love Exposure, Sono’s latest still maintains this eclectic director’s outlandish approach to filmmaking. Consisting of numerous bizarre and unsettling set pieces, carefully sound-tracked by a penetrating classical score Sono’s distinctive visual embellishments surround a lavish contemporary frame narrative, which sumptuously portrays the anguish and melancholy of a nation in a state of disquiet.

Thanks to this rich tapestry of delicate visual flourishes, Himizu organically develops into a beautifully presented dystopian revenge thriller that belies its harrowing backdrop, in turn creating a truly powerful piece of socially reflective fiction. Tense and unnerving but with an admirable degree of charm and intelligence Sono has yet again proved himself to be a truly remarkable director by skilfully combine the extravagances of Eastern cinema with a shrewd and pensive framework.

Merging this aesthetic charm and dense, involving narrative with some powerful central performances, Sono has perhaps produced his most profound and important work to date. Whilst the film’s adult cast fail to expand their acting beyond elaborate physical comedy and strangely emotionless cries of passion, the performances of both Himizu’s teenage leads are sublime. Behind Sono’s superbly executed film lies a fascinating critique of a society whose over reliance on nuclear power has left its future generations in a perilous situation. Both Sumida and Keiko come from similarly dysfunctional families, where their parents quite literally want them dead, a powerful allegory for a country whose short-sighted hunger for energy has resulted in its youth inheriting the broken legacy of a nation overreaching in its quest for growth.

Himizu may perhaps be too over dramatic and extravagant for some, yet it’s rare that a film comes about as proportionately entertaining and culturally important. Indeed, Sono has successfully fashioned through his endearingly distinguishable style a harrowing allegory of a damaged society which both screams out for a drastic political change whilst also presenting a vigorously absorbing revenge tragedy.