Swedish director Lisa Aschan’s debut feature She Monkeys (Apflickorna, 2011) is an immensely powerful and precise examination of adolescent female sexuality via the relationship between two young girls, Emma (Mathilda Paradieser) and Cassandra (Linda Molin). When Emma joins the school’s equestrian team, Cassandra take her under her wing – that is, until a catastrophic power struggle emerges between the two. The power of She Monkeys lies in both its simplicity and complexity. Simple in the sense that its plot examines a typical teenage relationship and situation that most audiences could easily relate to. 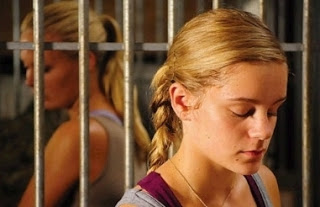 However, Aschan and co-writer Josefine Adolfson take this simple narrative and develop a captivating psychological portrait that carefully exposes and explores all the complexity of adolescent sexual awakening. Aschan also spent six months carefully selecting the two lead actresses for their respective role, as they needed to be able to cope with both the gruelling physical demands (gymnastics, horse riding) and emotional complexity of the script.

Clearly, this careful selection has paid off, as both the central protagonists give strong performances showing a clear understanding of the issues of sexuality and control. The two themes of are carefully played out, as the manipulative Cassandra controls the youthful and initially naive Emma. These issues are explored in typical teenage social settings, the creates not only believable characters but people that audiences can identify with, giving She Monkeys a universal quality.

There is also deft use of secondary plots surrounding Emma’s younger sister Sara (Isabella Lindquist). This, the more controversial aspect of the film looks at the very early moments of adolescence. Ideas of womanhood and when it is correct for a child to become aware of sexuality are developed in a creative and thoughtful manner giving the subject matter the sensitive treatment it deserves. With outstanding performances and an incredibly strong, well-written screenplay, Lisa Aschan’s sublime She Monkeys demonstrates once again the current strength of Swedish cinema and that she is a director that we should all keep a close eye on.