Following last year’s impressive performance in Martin Scorsese’s critically-acclaimed Hugo (2011), British comedian Sacha Baron Cohen is back doing what he does best with yet another satirical caricature to add to his ever growing list. For his latest endeavour, The Dictator (2012),  Cohen has once again reunited with director Larry Charles (Borat, Bruno), in a film that benefits much from an uncharacteristically straightforward narrative.

The plot follows Cohen’s Admiral General Aladeen, a tyrannical ruler of the oil-rich North African state of Wadiya. When he’s not shooting officials and runners on his way to a sprint race victory or playing ‘Munich Olympics’ on his Wii, he spends his days enriching Uranium to build nuclear weapons – much to the chagrin of the West – all the while executing anyone who gets in his way. 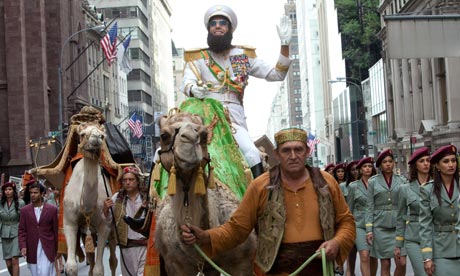 When Aladeen is abducted by psychotic US head of security Clayton (John C. Reilly, in a funny but brief appearance) and unable to deliver a speech to the UN, the dictator is left penniless, beardless and unrecognisable. Worse still, his deceitful second-in-command (Ben Kingsley) has put a plan into motion for personal gain that will turn Wadiya into – shock horror – a democracy. Aladeen must rely on the help of feminist do-gooder Zoey (Anna Faris) and dismissed scientist Nadal (Jason Mantzoukas) to get back on his throne in time.

The Dictator’s narrative is a little bit more scripted than Cohen’s previous efforts, which saw him interact with real people – often with hilarious results. In addition to the riches-to-rags story beat, there is also a rom-com element to the film as Aladeen is helped along his journey of redemption by Zoey, which makes for some humorous moments.

You needn’t worry about it being too scripted though; Cohen’s unique brand of offensive humour is on full display from the outset as sexist, racist, and vulgar gags abound. Saddled in-between are a number of outrageous, cringe-worthy sequences that have long been Cohen’s trademark. These often occur with scientist turned partner-in-crime Nadal, and the chemistry between Cohen and Mantzoukas is evident.

Admittedly, not all the jokes hit their mark – the celebrity cameos (including Megan Fox) don’t have the intended impact, but the audience reaction is for the most part well-calculated. The hilarious usage of overblown music tracks such as Moment Like This is just one example of the excellent comedic timing which permeates The Dictator throughout.

If you don’t take Cohen’s latest role too seriously, you may likely find Admiral General Aladeen to be another fantastic character to add to Cohen’s catalogue. Assuming you’re not easily offended, The Dictator is laugh-out-loud comedy at its best.

If you are looking to watch movies online then make sure you try the free trials which are available before committing to any contracts. There are movies for everyone and you can even find more Sacha Baron Cohen movies to stream.