Peter Strickland returns to the Edinburgh International Film Festival with his 1970s-set meta-horror Berberian Sound Studio (2012). Marking a significant shift in both theme and tone from his strikingly assured 2009 debut Katalin Varga, Strickland’s sophomore feature is a profoundly atmospheric and baffling investigation into the roots of fear.

British sound technician Gilderoy (Toby Jones) is brought to Italy to work on a gruesome Italian horror film about witchcraft and the persecution of women. Not only does he struggle with the language barrier but also the film’s financially thrifty producer and its shockingly graphic depiction of violence towards women. Slowly Gilderoy begins to find it difficult separating fact from fiction, with the foreboding sense of dread emanating from the film he’s working on rapidly consuming his mind. 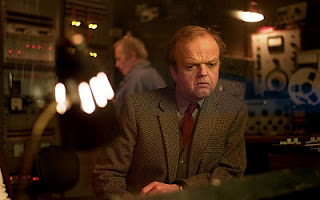 Combining a delectable sense of nostalgia for a world before cinema relied upon on digital recording devices, with some fantastic period design, Berberian Sound Studio could quite easily be a contemporary stab at the changing methodology of the filmmaking process. However, Strickland’s penetrating thriller is far more of a meditation on horror and the emotions it evokes, quite literally stripping away the layers of this menacing genre, revealing the true origins of fear that hide behind the medium’s artificial effects and sound designs.

Unsurprisingly, Strickland relies on sound to punctuate ever step of his confounding deconstruction of a genre, creating a palpable sense of escalating anxiety, only breaking stride to ease the audience’s heightened trepidation with some delightfully droll humour. This sharp wit not only helps amplify how remarkable different British and European cinema is in approach and style (Strickland, despite being British has only made film sets in continental Europe) but also how culturally different we are in lifestyle.

Jones gives a remarkably nuanced and assured performance as the film’s awkward and insecure protagonist. Portraying a man caught between the filmmaker’s desire to frighten and the audience who demand to be scared, Jones successfully illustrates his character’s complex range of emotions with ease. Incredibly watchable throughout, Jones brilliant flits between the initial nervous demeanour of his character, to the increasingly tormented man haunted by his past that he slowly becomes. Achieved with relative ease, Jones constantly demands the audience’s attention and rewards them with a phenomenally poignant performance.

At one point Gilderoy is verbal attacked for describing the film he’s working on as simply ‘horror’, instantly informed by its boorish director that it’s “not a horror film, it’s a film about the human condition”. Berberian Sound Studio, despite its Dario Argento-inspired subject matter, is far less of a horror story but rather a harrowing thriller that delves into the recesses of the human psyche far more effectively than the majority of viscerally grotesque films we typically encounter. A fascinating deconstruction of fear and the complexities of how sound can blind the preconceptions of our impressionable subconscious; Strickland’s film is by far one of the strongest additions to this year’s EIFF.