Jim however, hasn’t been broached about the subject, culminating in Elena’s first day being fraught with domestic conflict. The dust soon settles but it rapidly becomes apparent that Cindy may not have had Florence’s best interests at heart when hiring Elena, rather searching for a companion to make her home life less gruelling. This fragile dynamic is further exacerbated when Cindy and Jim’s son, Nathan (Silver), comes back home to stay indefinitely. Nathan sets his eyes firmly on Elena and with her unwilling to reciprocate his affections she quickly finds her stable job swiftly becomes compromised. 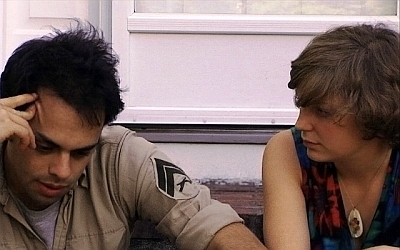 Shot in Academy ratio and using hand-held digital camera’s Exit Elena has the feel and tone of documentary, yet successfully manages to create a thoroughly enthralling drama from these bare bones. Split into three chapters, which represent the major changes in Elena’s precarious employment, Silver has created a film that effortlessly manages to transcend the usual trappings of low budget American indie films and become a wonderful example of what you can do with limited resources.

Kia Davis excels as Elena, carrying the film from start to finish with a compelling and charming performance, which suggests she has a bright future in front of the camera. Her phenomenal performance is enhanced by the collection of deeply detestable characters Silver has created to inhabit her world. Cindy and Jim Akerman are clearly remnants of the baby boom generation with a hideously free spirited approach to life and family, whilst their son Nathan is the result of all their worst genes carelessly mixed together to create a horrendous offspring with an irritating sense of self entitlement and a cacophony of various emotional issues thrown in for good measure – all of this whilst elderly Florence is treated like a cumbersome piece of unwanted furniture.

It’s this boiling pot of fractured family relationships combined with Elena’s calm and calculated demeanour, which ignites Silver’s incredibly witty script. Successfully fashioning an incredibly awkward and stifling domestic dynamic Silver has created a fascinating film that belies it meagre budget. Indeed, Exit Elena may be small in scale but it more than makes up for it with a wonderful collection of eclectic characters, each with their own delightfully idiosyncratic mannerisms.

Exit Elena is an intelligent, and carefully structured examination of how we treat not just our elders but our family and friends as a whole, building an intoxicating (and often hilarious) atmosphere of anxiety and despair – a wonderfully charming film and one of the more pleasant surprises at this year’s Edinburgh International Film Festival.