Home for the Weekend (Was Bleibt, 2012) is an astute and compassionate domestic drama which oozes with the sort of effortless naturalism filmmakers rarely capture. Directed by Hans-Christian Schmidt and starring Lars Eidinger, Corinna Harfouch and Sebastian Zimmler, this touching tale of one family’s failed efforts to deal with the sickness of its matriarchal figurehead has a bitter-sweet after-taste.

Macro rarely makes the journey from Berlin to the provincial town of his parents – its even rarer that he comes accompanied by his wife. His farther has just relinquished his publishing company and is about to settle into retirement whilst his brother is busy trying to keep his newly opened dental surgery afloat. However, the reason he’s finally decided to visit with his son is the health of his mother, who suffers from a mysterious mental illness that doctors have thus far failed to correctly pin down to one exact diagnosis. 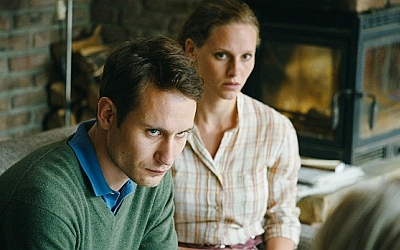 Macro’s mother’s call seemed urgent so he rushes out for a weekend family get-together, anxious about what news his she has to tell. At first, the subject appears to be his father’s decision to retire, however, the real reason has much greater implications – his mother has decided to stop taking the drugs which for thirty year’s have kept her stable – but ultimately left her locked in a prescribed prison of medical dependency.

At first, Home for the Weekend feels like a formulaic family drama that looks like doing little more than erupting into clichéd domestic conflict. All the signs seems to point that way, with the family’s tendency to treat their mother like a piece of delicate furniture slowly starting to ware her down – while the atmosphere of repressed emotions which hangs in the air looks set to ignite into a barrage of home truths and bottled up emotions. However, the film steps up a gear as the climax of these feelings of deceit and mistrust appears to have passed – thrusting the audience into an immersive journey of redemption.

Despite this impressive dramatic change in pitch and tone, Home for the Weekend’s basic premises remains a hindrance. There isn’t enough depth to behind this incredibly secretive family for it’s characters to shine, resulting in the film’s final dramatic punch lacking the power to blow its viewers away – Schmid’s clinical approach to filming, whilst superbly immersing us within this fractured family dynamic sadly culminates in the film’s emotional ending feeling disappointingly diluted. Whilst commendable for its sensitive, yet critical approach towards the prejudices which often accompany mental illness, Schmid’s film feel like it could have perhaps made more of this narrative device – instead of just as a tool to expose his character’s numerous short comings.

This deconstruction of a picture perfect family certainly makes for entertaining viewing. However, there remains a nagging feeling that perhaps more could of been made of Home for the Weekend’s core subject.