Former music video and television director Ido Fluk premiers his debut feature film, Never Too Late (2012), to UK audiences at this year’s Edinburgh International Film Festival. A touching and sumptuously fashioned drama about a young man returning to Israel after spending eight years abroad, Never Too Late is an insular tale of self-discovery and confronting your demons.

Herzl (Nony Geffen) has reluctantly returned home from an eight year stint in South America due to a lack of funds. During this time his father died and due to their complicated relationship he never returned home for the funeral. Torn between his stubborn pride and the guilt which suffocates him, Herzl takes a job distributing posters around Israel which allows him to partake in personal pilgrimage to the coastal town he used to visit as a child with his father – the perfect opportunity to not only cure his travelling blues but reconnect with the memories of his lost father and put to bed the guilt surrounding his bereavement. 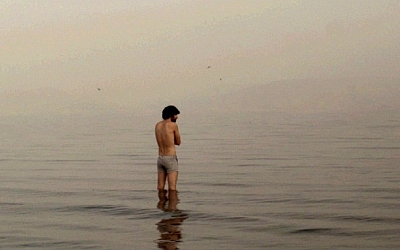 Riddled with clearly signposted symbolism, Fluk’s debut takes the audience by the hand and carefully explains to them at ever step of Herzl’s journey the range of conflicting emotions he currently experiencing. From comparisons with his situation and the story of Robinson Crusoe (conveniently a book his father used to read to him), all the way to the dating agency posters he’s hired to distribute which proclaim “It’s never too late”, Fluk never lets you forget why his protagonist seems so distant and detached. Attempts to integrate a subplot about Herzl’s generation being caught between the winds of change in Israel, gives a informed perspective but feels underused, taking a back seat to the onslaught of unnecessarily symbolism which otherwise litters the film.

Despite this often-patronising approach Never Too Late remains an accomplished drama full of entertaining and engaging moments. Fluk is clearly comfortable behind the camera, dressing the film’s sombre subject material with some breathtaking visual flourishes. Whether he’s using extreme, voyeuristic closes ups to allow the audience to haunt Herzl like the memories and regrets he can’t ignore, or using the high rise Tel Aviv cityscapes and rolling countryside to amplify his feeling of being trapped in his homeland, Fluk does a remarkable job of immersing us in Herzl’s journey, allowing us a passenger seat perspective on his deeply personal voyage to redemption.

An unsubtle, yet beautifully rendered road movie about coming to terms with grief and guilt, Never Too Late lacks the emotional gut punch it initially promises yet remains a genuinely heartfelt story of moral salvation.