Indonesian director Edwin’s Postcards from the Zoo (2012) finds itself at the 66th Edinburgh International Festival after a muted critical response whilst in competition at this year’s Berlinale. Many found its meandering plot and overbearing whimsy too jarring against the more serious and astute films competing for the festival’s prestigious Golden Bear, so how will its unconventional and alleged irksome approach fare away from the harsh, critical glare of the Berlin Palast?

Postcards from the Zoo has one of the most captivating and promising opening sequences of any film this year. We observe Lana, a 3 year old girl as she wanders lost through a zoo searching for her father. The zoo has long since closed and as she roams through this eerily empty entertainment complex she comes across a myriad of animals, each perfectly captured going about their own business, filmed through a warm and inviting collection of soft hue’s – creating an almost magical realm of innocence and purity. 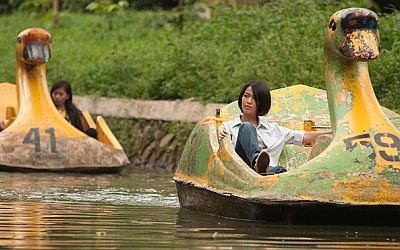 Sadly, the action quickly transfers us to Lana’s life as an adult, now working in the same zoo after never finding her father. Having been reared raised by a giraffe trainer, this is the only life she’s ever known but when a charming, Stetson toting magician charms her off her feet she finds herself ready to leave the zoo and embark on the real world. What she discovers is a harsh, vile society devoid of any of the charm and simplicity of life within the zoo -and sadly any of the interest initially sparked by the film’s gentle opening sequence.

With a lack of any discernible, or revealing narrative and a redundant narrative arc, Edwin’s quirky and elaborate tale of self-discovery fails to effectively resonate on any tangible level. Lana’s voyage through life, despite encountering numerous obstacles, is devoid of any peril or intrigue, and she’s seemingly on a lifelong quest to do little more than eventually be able to reach the belly of the zoo’’s solitary giraffe. This incoherent direction relies heavily on its unconventional approach to engage the audience with its obtuse narrative, yet sadly the film becomes tedious before its even allowed time to develop its paper-thin plot.

With much of Lana’s motives obscured from the viewer it’s unclear what exactly Edwin is attempting to say and by the time the film’s capricious cowboy has deserted her the story has become so incomprehensible that what proceeds it is little more than a monotonous collection of curious, yet strangely insipid vignettes. He’s clearly a director attempting to carve out his own distinguishable style, yet by sacrificing a conventional narrative he’s alienated even the most open minded of festival patrons. Clearly too concerned with creating something of immense aesthetic value, Postcards from the Zoo is sadly a failed experiment in tentative filmmaking.