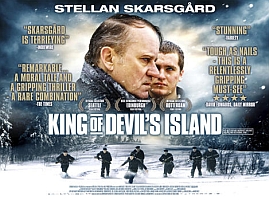 Marius Holst’s King of Devil’s Island (2010) is a fine example of how even the ugliest and well concealed events of history can be the basis for something profoundly beautiful. Based on real life accounts from Bastoy, an isolated and inaccessible Norwegian reform school for maladjusted young boys (which continued to operate well into the middle of the twentieth century), this tense, Ice steeped thriller is saturated with an overriding atmosphere of human tragedy.

Stellan Skarsgård plays the school’s condescending governor Bestyreren, who rules over these young men like a virtuous dictator, turning a blind eye to the obvious abuse suffered by these underprivileged boys whilst also quietly profiteering from their misery. One cold winter’s morning we observe two new inmates arrive on the island after braving the treacherous sea trip. In just one of the many techniques used to further crush these young men’s spirits they’re freshly re-named C19 (Benjamin Helstad) and C5 (Magnus Langlete). 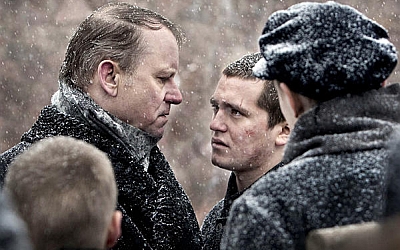 The two boys’ existence within this soul destroying establishment couldn’t be any different and whilst C5 is left to suffer the most mentally and physically damaging of abuse, C19 fights against the establishment and attempts to breakout from this nightmarish prison. However, he soon discovers that escape from a juvenile version of Alcatraz requires more than just the headstrong determination of one man, resulting in a brutal uprising upon this secluded island of misery and in turn creating an incredibly violent mutiny.

In addition to Skarsgård‘s monumental presence the combination of a vast array of impressive, non-professional acting talent with some stunningly captivating cinematography and immaculate attention to detail creates something visually alluring out of this otherwise unrelenting prison of wretched ill fortune. The most striking element of the film is its snow capped surroundings which, become like an extra character, adding to Holst’s already palpable atmosphere of repression and making escape from Bolstoy a perilous and intimidating pursuit – all whilst drowning the boy’s already bleak lives in a series of washed out greys and off-whites.

King of Devil’s Island, despite initially looking very much like an all-boy version of The Magdalene Sisters (2002), is difficult to describe as anything less than an uncomfortably haunting journey to the breaking point of the human spirit, which, despite its few missteps along the will stay with you long after you leave the cinema.