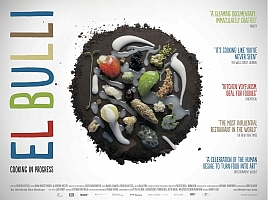 Cuisine-concerned feature documentaries are few and far between, and on the evidence of Artificial Eye’s El Bulli: Cooking in Progress (2011), this is perhaps no real loss, so limited is the film in terms of niche appeal and visual flare. German director Gereon Wetzel admirably attempts to match the culinary experimentation on display with a similarly left-field, observational shooting approach. Sadly, what we’re left with is a flat, drab presentation of a pedantic Blumenthal-esque chef and his besieged, highly-strung minions.

The chef in question is Spanish wizard Ferran Adrià, the ultra-passionate patron of the titular Catalan restaurant El Bulli. With little or no back story provides for any of the n-screen subjects, from Adrià and co-director Oriol Castro through to the lowliest waiter, Wetzel’s doc focuses almost solely upon the creative process. For the first 45 minutes, all we really see is a group of highly-trained chefs on research hiatus debating the merits of water-flavoured jelly (!?) and adding miniature ice cubes to dishes to enhance the eating experience. Those with little time for nouvelle cuisine will find little to alter their perceptions here. 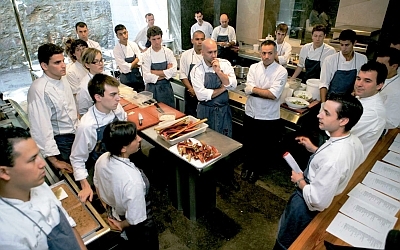 With such a specific remit, there’s very little on display here to warrant El Bulli’s theatrical release. Unlike the Blumenthals, Ramsays and Olivers of this world, Adrià is a relative unknown here in the UK outside of a very select number of circles, and it’s almost unimaginable that, even in a quietish week, Wetzel’s film will do anything other than vanish into the void. A select few may take pleasure from fancy foodstuffs on display, but with no real narrative thrust and only sporadic moments of conflict, there’s little here for even the arthouse crowd.

The one major positive is perhaps Stephan Diethelm’s lo-fi score, its spiky percussion and tubular ‘bongs’ complementing the hustle-and-bustle of El Bulli’s kitchen well. However, even this musical relief is in dangerously short supply, with Wetzel seemingly far more concerned with capturing debates over the vacuumisation process and whether Adrià really can “taste the almonds”. Much like El Bulli’s interior design, everything is too clinical, too sterile and far too serious.

For the overwhelming majority of regular cinemagoers, El Bulli: Cooking in Progress is a very difficult film to recommend, so thinly spread is its intended target audience. If you’re already an Adrià-convert then seeing the great gastronome at work may well be more than enough of a draw – just don’t expect to learn anything profound about him or his unique culinary approach for the proceeding 148 minutes.