Having premiered at this year’s Berlin Film Festival, Rebecca Thomas’ Electrick Children (2012) contorts the American Indie genre with a tale of teenage confusion set against the backdrop of organised religion. With an enticing narrative twist, a star-making performance by Julia Garner and some mesmerising aesthetic flourishes; Thomas’ debut has all the ingredients required of a cult classic.

Rachel (Garner) lives in an isolated Utah commune with an abundance of brothers and sisters under the protective care of their Evangelical parents Paul (Billy Zane) and Gay (Cynthia Watros). One day she comes across a mysterious blue cassette and commits a cardinal sin by listening to the forbidden music recorded upon it. Not long after this event Rachel discovers she’s pregnant and whole-heartedly believes this forbidden cassette represents gods vessel and the music it contains the Holy Spirit blessing her with the gift of life. Needless to say her parents aren’t convinced and quickly arrange a shotgun wedding, however Rachel is determined to find the man who recorded this seductive song and escapes for the bright lights of Las Vegas. 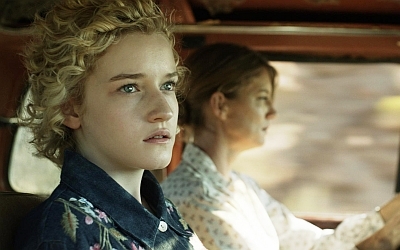 Comparisons with Sean Durkin’s remarkably assured debut Martha Marcy May Marlene (2011) are sadly unavoidable, with both film’s centring on a secular, backward community based deep within Middle America. Both films also star Garner, however, whilst her role in Durkin’s taut thriller was incredibly brief, here she’s allowed to spread her wings and use Electrick Children as a springboard for what promises to be a fruitful career. Her wide eyed innocence and natural beauty whilst undeniably endearing also gives the film’s eccentric story a magical, childlike charm – no more so than when she participates in a game of ‘Never Have I Ever’.

Thomas’ visually assured debut has all the aesthetic charm of a music video, constantly taking flight into a glorious collection of richly fashioned vignettes which help the film’s story of repressed young minds escape into numerous flights of the imagination. Most noticeable however, is how sublimely she uses the atmospheric contrast between Rachel’s Little House on the Prairie origins and the garish neon glow of Las Vegas’ strip lighting – beautifully using the city’s gaudy façade to present us with a world which feels as Alien to us as it would Rachel.

Sadly the film’s enticing central premise – of a devoutly religious girl who lives by the laws of chastity being impregnated by music – swiftly shows signs of faltering. Thomas tries her best (yet fails) to switch the focus towards a misguided love story between Rachel and a repugnant slacker (played incredibly convincingly by Rory Culkin). Rich and inventive, yet lacking in structure, Electrick Children is a fascinating, if flawed debut which deserves to be viewed if only for Garner’s enchanting performance.