It was always inevitable, but time appears to have finally been called on the popular Ice Age series. What was once lovable and warm-hearted has become a cynical corporate cashpoint, and aside from the reliability of mischievous, acorn-loving squirrel Scrat, there’s not much to take away from the latest entry, Steve Martino and Mike Thurmeier’s Ice Age 4: Continental Drift (2012). When the titular event occurs at the film’s beginning, strong-minded woolly mammoth Manny (Ray Romano), goofy sloth Sid (John Leguizamo) and tough sabre-toothed cat Diego (Denis Leary) find themselves separated from their unconventional family. 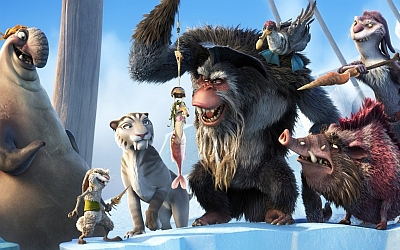 To find a way home, they will have to make new friends and face off against a fearsome new rabble of foes. As you can probably glean from the rather unimaginative premise, the latest Ice Age entry has no qualms about mining the bottom of the barrel for ideas, and the arbitrariness of it all is only saved by those brief segments involving Scrat. They are the few-and-far-between moments which still retain the series’ visual wit and charm; everything else feels so joylessly rote. No manner of ‘added value’ can compensate for this; the introduction of Sid’s geriatric grandmother (voiced gamely by Wanda Sykes), a cute gang of helper chipmunks, a fleet of tough animal sea pirates, and even some Sirens can’t liven it up.

In fact, the only addition that works at all is Jennifer Lopez’s Shira, a spunky sabre-toothed companion for Diego, who benefits from a strong portrayal by the singer-actress. With Manny’s daughter Peaches (Keke Palmer) now a teenager, there was a ripe opportunity for Ice Age 4 to move back to its genuine familial roots. Choosing to keep her off-screen for overly long periods of screen time, then, proves hugely detrimental to this. The prime problem is not just a lack of imagination, but an incredulous resistance to character development – after four instalments, they have to give us something.

This partied with the depressing lack of humour creates an unpleasant experience that feels like studio-mandated slap-up rather than a passionate, full-of-beans sequel. Eschewing its potential to function as a comforting tale for parents, Ice Age’s silliness might still entertain tiny tots, but any older children are likely to prove restless cinema companions, and who can blame them? With a fifth film as likely as the sun rising tomorrow, Fox might want to show a little more respect for their audience both young and old next time.