Sixto Rodriguez, the Detroit-born, Mexican folk singer who never quite made it in the States during the 1970s, is the humble star of Malik Bendjelloul’s Searching for Sugar Man (2012). The film tells the incredible story of how a bootleg copy of Sixto’s album Cold Fact arrived in apartheid South Africa and became a massive hit, selling thousands upon thousands of records and inspiring the voice of a generation. CineVue met Rodriguez and Swedish director Malik Bendjelloul to talk about fame, films and iPhone apps. The rapport between director and star is charming and entertaining to watch, but Rodriguez – clearly someone not entirely comfortable with the trappings of fame – was sceptical at first. 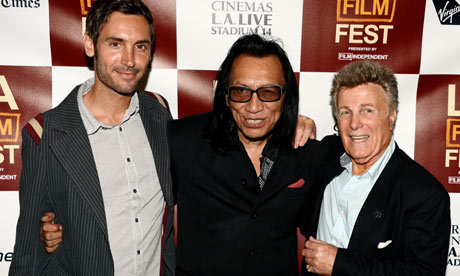 Bendjelloul states: “I met him [Malik] in 2008; the film climaxes in 1998. And I was sceptical about it, about the idea. It wasn’t until last month that he actually finished it for Sundance. It won five standing ovations and two awards. But I didn’t have anything to do with picking who was going to be in the film or what the dialogue was going to be. I don’t think he had a story or a title as well”.

Bendjelloul knew he’d struck gold with this incredible story. “I spent a couple of years trying to find stories. When I came across this, I was like…wow. I think that the structure, I had from the beginning, because I thought it was such a powerful narrative. That you start off from a South African perspective, that they actually think he’s dead. Many were opposed to that – they thought that everyone was going to know that he’s alive. But this is the story! It doesn’t matter if you know he’s alive”. We asked Malik about the animation, perhaps the only weak point in an otherwise perfect film. “The first idea was to make a lot of animation”, he explained. “Everything that wasn’t film should be animation. But I couldn’t afford [the animations] because I couldn’t get professionals to do it. I used my iPhone with a Super 8 app, to make a lot of the things that were supposed to be animations because this is cheaper! It was really very primitive conditions”.

Malik was nervous about his portrayal of Rodriguez, even if he felt that the film would stand alone as an incredible story: “You adapt real life into something. You are telling something that is perceived as truth”. And how does Rodriguez feel about all this fanfare: sell-out shows, film festivals, rounds of interviews and an official soundtrack released by Sony? “I’m very lucky. You know the Gladstone duck? He falls down and finds a diamond. I have that kind of luck – but I don’t gamble. Only with my life”.