Showing in the Directors’ Fortnight strand of the 65th Cannes Film Festival, Ben Wheatley’s Kill List (2011) follow-up Sightseers (2012) is an unexpectedly lighthearted jaunt – with serial killing of course – but a jaunt nonetheless. Taken from a script developed by its two leads Alice Lowe and Steve Oram, initially intended as a stand-up routine and then a television pilot, Wheatley adds a splash of his own twisted world view, lending the comedy a sharply macabre edge. 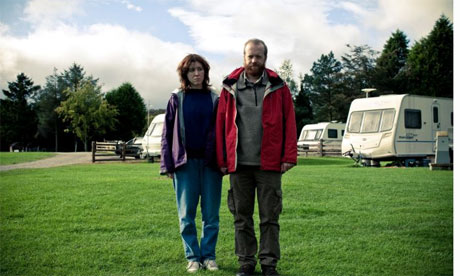 Entering middle age with a feeling that they might have lost out in life, Chris seethes with secret discontent and Tina is still guilty about the accidental death of her dog Poppy. Chris also hates litter louts and upper middle-class men with a sense of entitlement, noisy neighbours etc. Having accidentally killed one such offender, Chris gets a taste for it, and it isn’t long until Tina enthusiastically joins in. The body count climbs as they continue on their itinerary through England.

Essentially, Sightseers is a one joke affair (caravans are always funny in a deeply tragic way), but the joke is a good one and the performers have clearly honed their characters to a beautiful degree. The details, the mannerisms, the little private jokes – “Mint me” – are all akin to Mike Leigh’s TV play Nuts in May (1976). Wheatley’s latest is a portrait of the little man, familiar from Prufrock to David Brent, always frustrated by his inability to enjoy his small pleasures and constantly suspicious and resentful of others who he feels are having a better, or at least nosier time. And yet there is a resilience to him that is surprising and, in this case, extremely disconcerting. In some ways, Tina’s breeziness is even more sociopathic as she has no narrative that she needs to pursue. The England they encounter is one of great and skillfully photographed beauty, but which is peopled by yobs, snobs and hen nights.

The script is also well-written, with plenty of laugh out loud moments. Wheatley is quickly proving himself to be a director of witty and well-put together films, even though some of the moments of excessive gore feel a little like he’s adding his own head-squashing stamp on the proceedings.

Just as Kill List represented a much closer approximation to the tone and atmosphere of the best of British horror than many other pretenders, so Sightseers feels like a continuation in that peculiarly English brand of Gothic comedy familiar to fans of the darker outings of the Comic Strip.