Set during the Second World War, Andrzej Munk’s Eroica (1958) is a classic slice of subversive Polish cinema, a dark satire which deconstructs the romantic notions of heroism surrounding the 1944 uprising. Divided into two parts (initially three had been planned) and referencing Beethoven’s Symphony No. 3, Munk’s film tells two distinct stories.

The first movement features comic wide-boy character Dzidzius (Edward Dziewoński), a small time cynic who we first see being drilled to take part in the Warsaw uprising. So intent is the Sergeant in drilling his men to march in time that he neglects the approaching fighter plane which only Dzidzius notices, and the men barely escape a strafing. Thoroughly disillusioned, Dzidzius returns to his wife who has shacked up with a Hungarian officer who has an interesting offer. If the Polish will give the Hungarians certain conditions then the Hungarians will provide them with some military hardware. 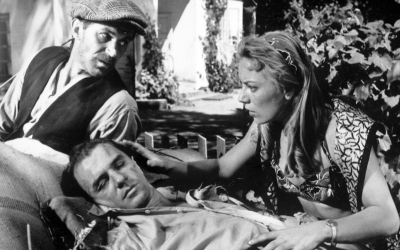 Dzidzius finds himself crossing enemy lines back and forth, prompted only vaguely by a sense of duty. Much more pressing is his need to protect his own well-being, escape his unfaithful wife and on occasion find booze. Munk’s irony is after all romantic. Although heroism in the more elevated sense is seen to be a fanatical, self-destructive and childish notion (no man’s land is roamed by feral children playing at war), Dzidzius becomes a kind of comic hero, battered and drunk and self-serving but no less brave-given the calamity of his situation.

The second part of Eroica is set within a POW camp at the foot of the Alps, where a group of Polish officers cling to their honour on the basis that one of their number, Lieutenant Zawistowski, managed to escape. New arrivals, fresh from the Warsaw uprising, are placed in the camp alongside veterans of the 1939 campaign who still discuss the efficacy of their cavalry charges against the German tanks, having learnt nothing. With their outmoded codes of honour and their pedantic self-delusional world view, the officers are as much imprisoned in their own notions of how the world operates as they are behind the barbed wire fence.

Behind both stories there is a real anger and bitterness against Munk’s own countrymen, but the structuring absence here is of course the often mentioned but never seen Reds, who (strangely) don’t seem to be turning up to support the uprising. The absurdist humour and very modern suspicion of the official ideology makes Eroica a valuable film to revisit, but also an entertaining one.