From acclaimed German director Christian Petzold comes Barbara (2012), a taut, brooding and intelligent drama set behind the Berlin wall, in the rural provinces of Eastern Germany. When our titular protagonist (Nina Hoss), a doctor working in Berlin, applies to immigrate to the West, she finds herself banished to a small rural hospital. Despite finding herself under constant surveillance from the Stasi, she still manages to smuggle in western luxuries thanks to her boyfriend, Jorg (Mark Waschke), who’s also quietly planning her escape.

At work, Barbara’s cold, severe demeanour means that others regard her as arriving with an attitude fuelled by ‘big city’ arrogance – she’s even described by one colleague as “sulky”. However, her exemplary bedside manner soon wins them over, especially Andre (Ronald Zehrfeld), Barbara’s new supervisor. Nevertheless, Andre’s affable persona soon evokes suspicion in Barbara. Is he here to help her integrate into her new job, or to report back on her? 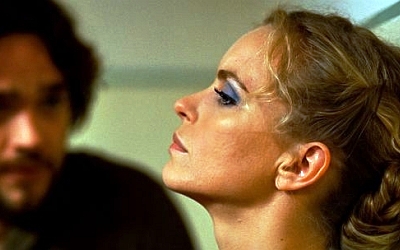 Barbara provides a refreshingly naturalistic exploration of East Germany in the 1980s. Using the bright and serene rural backdrop of this remote town, Petzold presents us with a socialist Germany more aligned to the ideas of Ostalgie than the conventional western interpretation of the oppressive shadow cast by the Iron curtain. However, behind this simplistic pastoral veneer there’s an organically evolving atmosphere of Soviet oppression and paranoia. From the same blue car that stalks Barbara, to the cell like appearance of her lifeless, allocated apartment, the film slowly reveals the subtle geographical restrictions of the era.

Hoss carries the film with an outstanding performance, evoking a range of emotions through the impenetrable façade she uses to mask her despondency with her current predicament. Sincerely revealing unforced affection and sympathy, despite her outwardly comatose presence, Hoss does remarkably well with such limited resources. However, the most fascinating element of Barbara is how Petzold slowly shifts his protagonist’s change in attitude via the Hippocratic oath. Her political resistance is overshadowed by her duty to care – creating a fascinating character study out of this sombre portrait of the East/West German divide.

Comparisons with 2008 Oscar winner The Lives of Others are understandable, if not a little insulting to Petzold’s simmering drama, with this nuanced and subtly compelling examination of 1980s Germany an utterly unique perspective on this much publicised period of European history. Barbara is a gripping and extremely compelling example of new German cinema at its very best.