LFF entry Laurence Anyways (2012) is Québécois director Xavier Dolan’s third full-length feature. Renowned for his exquisite visual style and sumptuous cinematography, there’s always been the feeling that Dolan is something of a cinematic narcissist, far more concerned with proving his technical ability than presenting a truly absorbing story – even going as far as starring in his own films. However, Laurence Anyways sees Dolan take a back-seat from acting, focusing all of his attention on directing.

Played out in almost episodic form, Laurence Anyways tells the story of an impossible romance between a fashionable young lady (Suzanne Clement) and her cultured boyfriend Laurence (Melvil Poupaud) who, after 30 years, reveals that he’s always wanted to be a woman. A transvestite love story and the implications of such a dramatic metamorphosis could so easily have succumbed to mawkish manipulation techniques, playing on the ostracism or harassment encountered by the film’s eponymous protagonist. Yet Dolan thankfully narrows the focus to the domestic and internal anguish of this transgender melodrama. 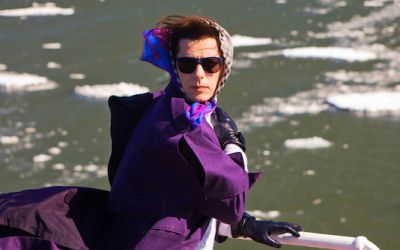 Poupaud plays Laurence brilliantly, capturing the conflicted yet assertive nature of his character – incredibly watchable and profoundly confident in a role which could so easily been played in a far more exaggerated and overt way. Yet it’s Clement as Fred, the woman who’s torn between her love for the man Laurence was and her inability to accept the woman he’s become, who steals the show. Her conflicted merry-go-round of intense emotions culminates in a tour-de-force performance, allowing the audience an accessible viewpoint from which to observe Laurence’s transformation.

Ostensibly a New Romantic period piece, Laurence Anyways is a lavish tapestry of raw emotions and internal scars, polished and gleamed to create a beautifully poetic depiction of the brittleness of love when faced against the harsh, scrutinising glare of society. However despite its aesthetic charm, Dolan’s epic scope feels strangely out of synch with such a simple premise, the 159 minute runtime diluting much of the film’s beguiling imagery. This precocious and long-winded narrative feels bloated with superfluous visual flourishes which, whilst initially enthralling, become too commonplace to effectively resonate with the same gravitas.

Whilst Dolan’s abilities have opened the door to greatness for him, his incapacity to pull himself away from the mirror of egocentricity has so far prevented him from joining the luminaries of arthouse cinema his work is so clearly influenced by. Proved once-more through Laurence Anyways, until Dolan can find a ruthless editor to turn his vibrant work into a more concise and absorbing piece of cinema he’ll remain little more than a young, infuriating pretender.