Back in 1998, Danish filmmaker Thomas Vinterberg (with the aid of an inflammatory script from enfant terrible Lars von Trier) shook up the cinematic establishment with Festen (The Celebration), an uncompromisingly raw depiction of a bourgeois dinner party gone horrendously wrong after a series of shocking, child abuse-related revelations. Fourteen years later – and with Vinterberg having failed to repeat his one-off success – the Dane returns to screens with Palme d’Or nominee The Hunt (Jagten, 2012), revisiting familiar ground but in a far more conventional, simplistic manner.

Danish star Mads Mikkelsen takes the lead as bespectacled small-town kindergarten teacher Lucas, who enjoys an incredibly relaxed, close relationship with the large majority of his young students. However, after rebuffing the advances of the smitten Klara (Annika Wedderkopp), the lonely pupil accuses Lucas of an ‘inappropriate’ act against her, which quickly snowballs into a firm allegation of child abuse. Demonised by the townsfolk – including Klara’s father and Lucas’ former best friend Theo (Thomas Bo Larsen) – our protagonist quickly finds himself the hounded victim of a heinous witch-hunt. 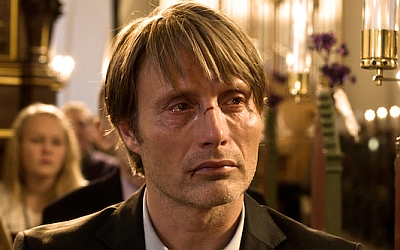 It sounds a bizarre claim, but there persists a nagging feeling that the award-winning Mikkelsen just may have been miscast as the all-too virtuous Lucas. The great Dane is perhaps to well-known (and even too dashing) to play the put-upon teacher, despite giving his all into the role. Vinterberg continually emphasises our hero’s innocence, leaving precious little scope for ambiguity – which inevitably renders The Hunt far less dramatic than it perhaps could have been.

Better cast (and arguably a more interesting character) is Klara’s father Theo, superbly played by the perpetually unkempt Bo Larsen – a memorable remnant from Vinterberg’s Festen, where he played the volatile Michael. The Dogme icon steals each and every scene he’s involved with, grunting and grumbling his way through a complex blend of conflicting emotions. Unlike the audience, Theo appears genuinely confused as to the reliability of his best friend’s testimony, caught between his seemingly angelic daughter and his erudite drinking/hunting ‘buddy’.

Pointedly, black and white and suffering because of it, The Hunt struggles to really add anything new or relevant to the great taboo of child abuse. It’s almost as if Vinterberg felt dissatisfied by the immeasurably superior Festen, and thus decided to produce a far more didactic, relatively glossy depiction of comparative events. One can’t help but wish that Von Trier had perhaps shown an interest in teaming up once again with his fellow compatriot – a far more complex, confrontational film was clearly there to be unearthed. Those similarly underwhelmed may be better served by Markus Schleinzer’s ice-cold Michael (2011).