One of eight Italian films to screen at this year’s London Film Festival, director Leonardo di Costanzo’s The Interval (L’intervallo, 2012) boasts Gomorrah (2008) screenwriter Maurizio Braucci as one of its co-writers – predictably presenting an exceedingly unfavourable depiction of Naples. Salvatore (Alessio Gallo), 17, is ripped away from the Lemon Ice stand he runs for his father by the local Camorra. He’s asked to perform a ‘favour’ and guard over Veronica (Francesca Riso), a precocious young girl who is being held captive in a dilapidated, abandoned and heavily fortified house.

Salvatore isn’t entirely certain what she’s done to deserve such intimate surveillance. However, he also isn’t dumb enough to go against the city’s local gangs, begrudgingly undertaking this peculiar assignment. As to be expected, the film’s two leads slowly begin to bond despite some initial trepidation over who works for whom. Veronica is noticeably agitated and insubordinate, whilst Salvatore is far more accommodating and polite, however the two find a common ground through the rekindling of adolescent memories that, despite their tender ages, seem a lifetime ago. 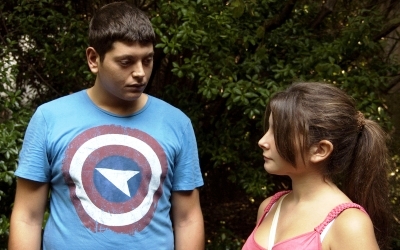 The Interval is a beautifully rendered rites-of-passage tale about the awkward progression from childhood to adulthood, told through a community where the young are thrust into adulthood far too early. Adults barely grace the screen in this finely tuned two-hander and the film’s two youthful protagonists commendably hold the audiences attention throughout with their restrained and well-calculated performances.

From the ghost stories that subtly remove the pair’s false veneer of maturity, to their charming excursion to the house’s flooded basement, Costanzo paints a beautiful portrait of lost childhood through a series of fairytale scenarios diluted by an oppressive score and the simmering fear of violence which bubbles beneath the film’s blossoming friendship. This delicately fashioned condemnation on the underground power structure in modern Naples may be light on action and social criticism, yet builds into an enchanting coming-of-age tale that broods with a palpable sense of camaraderie.

A deserving recipient of the FIPRESCI Award as part of critic’s week at this year’s Venice International Film Festival, Costanzo’s The Interval is an assured debut and shows that his decision to move from documentaries to fictional filmmaking was a sensible one – a director to keep an eye on.