Cult hit series Breaking Bad heads into the second half of its fifth and final season in the US, the show’s fourth season arrives on DVD here in the UK. Created by writer/director Vince Gilligan and produced by AMC, the network which also produces prestige programmes such as Mad Men and The Walking Dead (as well as the sadly cancelled conspiracy thriller Rubicon), Breaking Bad continues to push the envelope of serious, edgy television drama.

It hardly needs saying, but if you’re not already following the intense, bloody exploits of high school chemistry teacher Walter White (Bryan Cranston) and his former student Jesse Pinkman (Aaron Paul) as they try to navigate the murky waters of manufacturing and distributing crystal meth, Season Four is not the place to pick it up. This is not simply because the complexities of the storyline would likely prove impossible to fully decipher without the preceding three years worth of context, but also because you would be missing out on some of the best narrative fiction of any form in recent times. 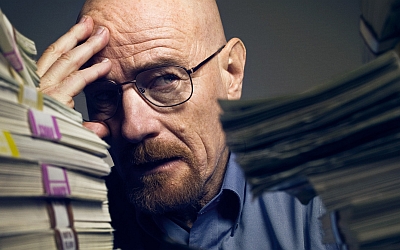 Season Four opener Box Cutter picks up right at the cliffhanger that Season Three ended on, and without intending to dismiss the phenomenal third season, it’s clear from the off that Four is fated to be even better. Importantly, as a series it delivers what its devout audience expects: lengthy periods of quiet; gripping domestic drama; and long build ups to sudden bursts of violence. Over the 13 episodes, the bonds between Walter and Jesse are stressed and stretched to breaking point, and we’re also given some insight into the personal history of Gustavo Fring (Giancarlo Esposito), Walt & Jesse’s employer.

The acting is extraordinary throughout; you won’t find a single bad performance in the series. Last week, Aaron Paul won his second Emmy for the role of Jesse. Cranston, who has gone from minor TV name to star performer thanks to Breaking Bad, is never less than magnificent, as is Esposito as Gus. The breakout performer of this season, however, is Anna Gunn as Skyler. Moving from the long-suffering, committed wife of Season One and the suspicion that characterised her in Season Two, Skyler becomes increasingly involved in Walt’s criminal activity, via the shady lawyer Saul Goodman (Bob Odenkirk).

The writers of the show are relentless in their ability to continually surprise without ever seeming contrived or cliched. In Breaking Bad’s pilot episode, Cranston’s Walter delivers a speech to his students at school, explaining that chemistry is “the study of change”. This is a perfect summary of the pleasures of watching Breaking Bad: observing what happens to this seemingly mild-mannered schoolteacher, when significant heat and immense pressure are applied.

Win a copy of AMC’s Breaking Bad: Season 4 on DVD with our brand new competition. Follow the link to enter.