After the recent, turbulent News of the World scandal, the ethics and role of print media within a society addicted to social networking has become a major talking point. In keeping with this cultural fixation with the Great British tabloid press, the Masters of Cinema label have decided to re-release Samuel Fuller’s Park Row (1952), a glowing love letter to the medium, and a celebration of tabloid professionalism and the forgotten influence of journalistic integrity. After the Second World War, Fuller worked as a tabloid reporter and always wanted to make a film about the ideals of free press and the once honourable role of a journalist. 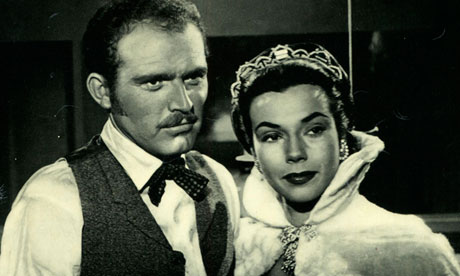 Drawing on his own experiences he created Park Row, the tale of a media melee fought over moral principals between two newspapers in the lusty days of the golden 1880s. Gene Evans plays Phineas Mitchell, our fictional substitute for Fuller, a newspaper man whose dedication to print media leads him to construct his own newspaper to battle against the skewed morals of his former employer – the intimidatingly beautiful, and curiously named Charity Hackett (played with a wraith-like charm by Mary Welch). The film’s title refers to the Manhattan street where most of New York’s newspapers where situated, with Fuller, backed primarily by his own finances (thanks to numerous studio demands).

It’s this level of respect and affection for the newspaper business which is ultimately the film’s greatest achievement, fashioning a beautiful paean to the inner workings of the industry with little of the cynicism we’ve grown to expect – all topped with charming sense of nostalgia. Fuller was once quoted as saying that “I write with the camera”, and Park Row sumptuously epitomises this statement, using long takes that capture the elegance of his set design whilst also requiring his actors to learn up to ten pages of dialogue for one scene.

This painstaking attention to detail and attempt to create a sense of realism culminates in a series of delightfully lived-in performances, with each interchange delivered with the exact degree of urgency and passion that was clearly intended when they were written. Celebrating the freedom of the written word – something that was genuinely endangered during the United States’ McCarthy era – Park Row is not only an educational tribute to the constitution’s principle notion of free speech and its complex definition within the media, it’s also an exhilarating and upbeat drama littered with excellent performances and a palpable affection for the cause.