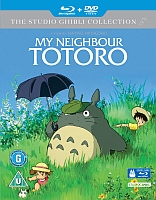 Eight-year-old Satsuki comes running in from the garden. “Mei says she saw a Totoro!” she tells her father. “You don’t believe me,” grumbles her younger sister. “That’s where you’re wrong,” replies their father. “I believe you’re being completely truthful. We’ll have to go back and pay our respects.” That’s the key to Hayao Miyazaki’s enchanting, essential My Neighbour Totoro (1988). Studio Ghibli’s animation treads the familiar territory of a child’s imagination. A modern film would see the adults involved question this outburst of magical realism. In the world of Ghibli, it’s not only welcomed but actively encouraged. 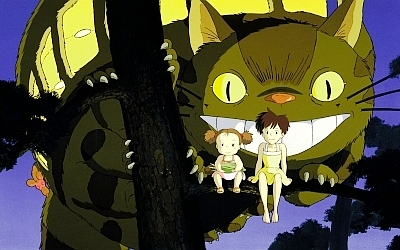 Twenty-four years on and that attitude still astounds. Yet My Neighbour Totoro is far from a typical film, even for Studio Ghibli. While magic plays a central part in almost all of their adventures, it is usually as a part of the plot. Totoro, on the other hand, virtually has no plot. There are no obstacles, no villains, no showdowns. Totoro himself doesn’t even appear until 20 minutes in. Instead, we spend time running alongside two young girls as they explore the world around them. The two girls’ mother is absent because she is ill, much like Miyazaki’s own when he was a child, but this innocent tale is about life more than death. The gorgeous animation also packs a mind-boggling level of detail into the rolling green vistas.

All of that careful craft seeps onto the screen beautifully without hurrying you along. Just the silent image of Totoro standing next to a tiny girl at a bus stop in the rain is at once adorable and hilarious. This gentle pace and amiable tone makes My Neighbour Totoro perfect for family members of almost all ages. What’s more, the Blu-ray includes eye-popping picture-in-picture storyboards, interviews with Miyazaki and his regular composer and producer, and even a 30-minute extract from a documentary about the locations that inspired Miyazaki’s first film set in Japan.

My Neighbour Totoro only found fame a year later, when it was first broadcast on television. Since then, audiences around the world have realised that it’s impossible not to get caught up in Mei and Satsuki’s everyday fantasy, especially with the stellar work from actual sisters Elle and Dakota Fanning on the dubbed English soundtrack. The two kids are effortlessly real and emotionally complex, but profoundly simple, and Miyazaki’s unique masterpiece embraces that childlike existence – to the point where Totoro has now become part of Ghibli’s iconic logo.