★★★☆☆
Cannily released by arthouse distributors Artificial Eye in the same week as the Austrian auteur’s 2012 Palme d’Or winner Amour, Michael Haneke’s made for TV Franz Kafka adaptation The Castle (Das Schloß, 1997) is not regularly cited in rundowns of the director’s very best work – more than likely due to its televisual origins. Regardless, any piece produced by Haneke is always worthy of appraisal (and, more likely than not, subsequent reappraisal), and beneath The Castle’s rough exterior lies an intelligent, albeit obtuse, meeting of minds between two of the 20th century’s most acclaimed artistic visionaries.

Ulrich Mühe (best known for his lead role in Florian Henckel von Donnersmarck’s 2006 Oscar-winning German drama The Lives of Others) stars as a the man referred to as ‘K’, an enigmatic land surveyor summoned to a remote village by the local government, itself referred to mysteriously ‘the Castle’. Upon arrival, our protagonist quickly finds himself growing increasingly frustrated with the exorbitant levels of bureaucracy that stand between himself and the completion of his contract. Unable to meet his shadowy employers first hand, and hindered rather than aided by his moronic assistants (Frank Giering and Felix Eitner, both labelled ‘Artur’ by K himself due to their apparent imbecile inseparability), the put-upon land surveyor struggles to break free of this nightmarish new prison. 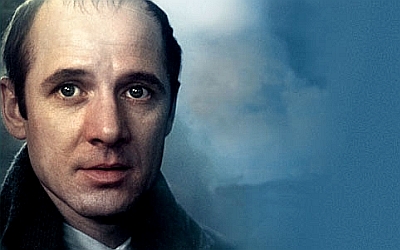 Haneke spent a great deal of his early career cutting his teeth in the world of television adaptations, with the revered director’s literary favourites proving rich pickings for his evermore cinematic eye. Kafka’s often bleak and demanding prose now seems a perfect match for the double Palme d’Or winner, known for placing his characters into positions of significant jeopardy and unease – with The Castle falling neatly in line with both men’s respective oeuvres. Yet whilst the latter’s icy sensibilities are certainly given room to thrive through Kafka’s text, Haneke also reveals a keen understanding of the revered novelist’s own inherent sense of ironic humour – all the more remarkable given the Austrian’s ‘austere’ label.

The drawbacks of any cinematic rendering of The Castle can be pinpointed from the outset. Even for a filmmaker of Haneke’s undoubted talent, Kafka’s meandering satire is intrinsically better suited to the page or stage rather than the screen – whether big or small. Conceivably due to sheer faithfulness over budgetary constraints, locations and cast members are kept to a bare minimum, in an attempt to heighten the distinct sense of claustrophobia and oppressive helplessness experienced by the slowly suffocating K. Yet such devotion to the text leaves little room for one of European cinema’s greatest provocateurs to really stamp his own mark on  proceedings.

One primarily for Haneke/Kafka fans and completists, The Castle may just manage to stand the test of time thanks to its allegorical weight and compelling construction. The award-winning Austrian now enjoys a far more exclusive zenith of international artistic recognition, but owes a great deal of success to the confrontational works of master craftsmen of Kafka’s colossal pedigree.

Win a copy of Michael Haneke’s The Castle on DVD with our brand new competition. Follow this link to enter.