From Pavel Lungin, the acclaimed director of Tsar (2009) and The Island (2007), comes The Conductor (Dirizhyor, 2012), a beautifully rendered orchestra of existential themes brought together to depict a sombre portrait of life. A famous Russian conductor, Vyacheslav Petrov (Vladas Bagdonas) takes his orchestra to Jerusalem to perform a special rendition of the St. Matthew Passion oratorio. However, an ominous fax message he receives prior to departing forces him to re-evaluate his life, curiously thrusting his whole orchestra under the spotlight, questioning the very values we live by and the invisible bonds that shape our lives.

The cultural riches of Russian history combine in this profound parable about our subconscious obstacles, coalescing rich musical compositions with an astute eye for intelligent literature and thought-provoking storytelling. Much like the basis of an oratorio, The Conductor uses age-old devices like romance, deception and murder to tell its tale, all within a rigid religious template. This symbolic approach demands that the viewer read between the lines in order to unearth the hidden beauty beneath this sombre thriller. 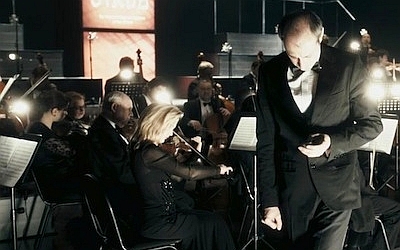 Lungin has all but removed conventional narrative techniques culminating in this exceedingly subtle examination of extreme emotions almost impenetrable to those looking for a way into its rich tapestry of symbolism. One scene, which observes Vyacheslav carrying a giant painting of a near-naked corpse like a representation of Jesus baring his own unique cross, makes for a particularly spellbinding sequence, riddled with religious and social overtones.

Operatic in both style and direction there’s no denying that The Conductor looks and sounds sublime. Beautifully fashioned with a classical score (performed by theologian and musical composer Metropolitan Hilarion Alfeyev) that haunts proceedings with an ominous ambience of inflexible fate, it feels like a carefully coordinated death march encroaching from some invisible orchestra pit, seamlessly consuming the actions of our protagonists, manipulating their every move and decision.

Featuring some sumptuous cinematography that captures the earthy beauty of Jerusalem and a cast full of outstanding performances, Lungin’s The Conductor is a film that, whilst hard to decrypt, captures your attention through its attractive imagery and captivating atmospherics. Demanding multiple viewings, this intriguing labyrinth of refined metaphors and expansive themes results in a film that initially leaves you cold – only to creep up on you continuously for weeks to come.