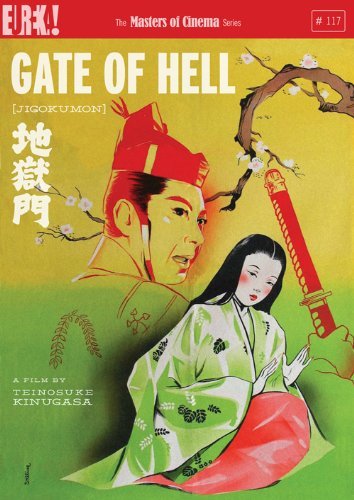 Winner of two Oscars and the Grand Prix Prize at Cannes, Teinosuke Kinugasa’s arresting 1953 effort Gate of Hell was the first Japanese film to employ a Western colour process. Now, thanks to the hard work of the always reliable Masters of Cinema strand, Kinugasa’s sumptuous hues and diverse palette have been gloriously reissued on Blu-ray, once again capturing the awe and magnificence of this visually spellbinding film. During an attempted coup in 12th century Japan, an attractive young woman, Lady Kesa (Machiko Kyo) volunteers to act as a decoy in order to help the lord’s wife escape to safety.

Kesa is escorted by a young samurai named Moritoh (Kzui Hasegawa) during their successful distraction he falls madly in love with his companion, transfixed by her beauty. On their return, this triumphant samurai demands the permission to marry the girl as his reward; however, it transpires she’s already married, to a well-respected noble man. Moritoh is not deterred, clinging to his desire and determined to win the love of Lady Kesa, going to extreme measures to show his commitment – with devastating consequences. 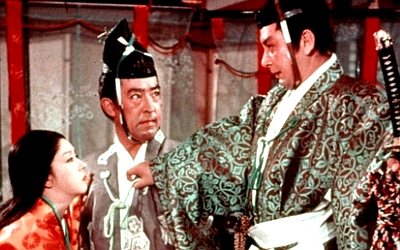 Ostensibly an old-fashioned melodrama, this tragedy about the price of love takes a unique and incredibly unromantic approach to love by focusing the story on the film’s licentious antagonist and his deluded fixation with Lady Kesa – with, Moritho’s desire burning almost as brightly as the film’s vivid imagery. Gate of Hell’s pioneering use of colour is magnificently embellished by this loving crafted Blu-ray transfer, with the film’s fragile and incredibly predictable narrative exquisitely clocked by its profound beauty.

The two extremes of love and honour clash in a conflict of stubborn pride and desire, with two men blinded by their obsessions and forced to battle for the same woman. There’s almost no doubt that Lady Kesa’s heart will remain steadfast in its commitment to her husband, yet she remains little more than a pawn in the boiling pot of uncontrollable emotions. The film’s rich tapestry of 12th century Japan can sometimes become too overwhelming, hypnotising the viewer and distracting from the story. Thus, Kinugasa is often required to combine his wide-angle shots with extreme close ups to pull focus back towards the story, recounted through a sparse script flourished by multiple explosions of visual delight.

Vibrant silk kimonos and richly textured samurai armour dance a delicately choreographed waltz against a backdrop of soft pastel shades to create a ballet of sinuous imagery. Whilst Kinugasa’s Gate of Hell’s tragic love story may feel like traversing over a well-trodden narrative path, this beautiful reissue has an aesthetic charm that’s remarkably timeless.