After successful screenings at last year’s Sundance, the 2012 Edinburgh International Film Festival and Film4 FrightFest, British director Jon Wright’s low budget sci-fi creature feature Grabbers (2012) finally arrives on DVD and Blu-ray after a limited theatrical run in late December. Combining the quintessentially Irish comedy styling of The Guard (2011) with the monster movie parody template of rom-zom-com Shaun of the Dead (2004), Wright’s bawdy and boozy alien horror is a refreshingly jovial slice of midnight entertainment with a delightfully home-grown sensibility that oozes with charm, charisma and a healthy splatter of blood.

On a far-flung island off the coast of Ireland, dependant alcoholic Garda Ciarán O’Shea (Richard Coyle, impressing again in a leading role after his successful star turn in Pusher earlier this year) finds himself organising a mammoth piss-up in the village’s only pub when a strange meteor hits the sea and releases a peculiar collection of blood sucking, tentacle wielding, amphibious monsters with a weakness for high alcohol blood levels. As the drinks flow and the aliens encroach further, Ciarán must unite this merry rabble of drunken locals if the island’s community is to survive the night. 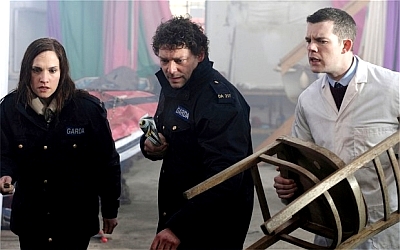 A gloriously joyful tribute to 50s B-movies and 80s monster flicks, Grabbers is littered with knowing references to everything from Night of the Living Dead (1968) to Alien (1979). However despite combining the ridiculous nature of films like Tremors (1990) and The Blob (1958) with the typically Gaelic humour of Father Ted, Wright’s film manages to fashion its own unique identity from this hefty amalgamation of sub-genre troupes and sitcom dialogue. This delicate balance is achieved thanks to an engaging cast of lovable rouges and an intelligent premise that effortlessly combines comedy and frights like a refined cocktail of chilling bumps in the night and a cacophony of belly laughs.

Combine this confident narrative foundation with an economical, yet extremely effective use of CGI for the film’s monstrous antagonists (something many contemporary monster movies could learn from) and you have a film that not only invites the audience to join in with the inebriated on-screen fun and games, it boisterously grabs you by the collar and forces you to the bar – leaving you completely enamoured with film’s delightfully tongue in cheek approach and fully immersed in this isolated island’s irregular plight.

Grabbers is ultimately a refreshingly home-grown genre film which stutters and stumbles its way into your heart thanks to an incredibly endearing Irish flavour and a subtly intelligent approach. Absolutely craic-ing.