The Expendables are back, and this time their ultra-macho efforts may be at least partially worthwhile. Countless fans of eighties action cinema were left with a bitter dissatisfaction at the flabby, dull and far too serious nature of Sylvester Stallone’s self-directed first film. However, after strong box office returns last time, Stallone and co. have been presented with the opportunity to make things right. While the sequel, Simon West’s coyly titled The Expendables 2 (2012), may not quite expunge previous misgivings, it represents a dramatic return to the one quality bizarrely lacking from the previous instalment – fun.

The writing is abysmal, the acting turgid and the general plot appears to have been forgotten along the way. Thankfully, this almost complete disregard for any semblance of actual filmmaking turns out to be a good thing; the lashings of silliness create a superb, uplifting levity, one that permeates into the viewer. Once you reach the conclusion, only to be greeted by Arnold Schwarzenegger and Bruce Willis driving a Smart Car, spraying bullets into presumably baffled bad guys, your only remaining option is to enjoy yourself. It’s completely bonkers, yet it feels like a breath of fresh air when contrasted with the multiple po-faced, dull action flicks populating our screens in recent years. 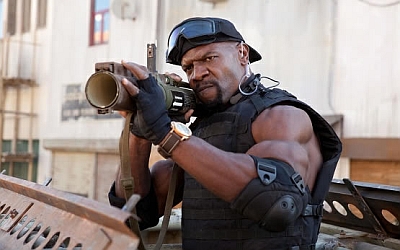 Following on vaguely from the first film, in The Expendables 2 CIA man Church (Willis) has decided that Barney Ross (Stallone) owes him big time, and the only way he can pay his debt is by gathering his team (Jason Statham, Jet Li, Dolph Lundgren, Terry Crews, Randy Couture and newbies Liam Hemsworth and Nan Yu) and jetting off to Eastern Europe to recover the contents of a downed aircraft. When they arrive, they discover the rather obviously named Jean Vilain (Jean-Claude Van Damme) waiting to hijack their mission. After a tragic incident, Ross and crew decide to hunt down Vilain and his band of thugs in order to wreak bloody vengeance on those that have wronged the Expendables posse.

The following ninety minutes is a relatively standard procession of revenge-flavoured action cinema, predictably encompassing explosions, gun battles and fist fights, but thankfully also including plenty of jokes, some intentional, others probably not. It’s pacey, loud and pretty exciting, certainly more so than the awful Taken 2 (2012), but not at the levels of Gareth Evans’ The Raid (2011). Adding to the humour are the cameos; Arnie’s role is more fleshed out this time, and he lumbers his way through a few action sequences, but it is the appearance of Chuck Norris that will raise a few cheers from onlookers. It’s a brief moment, but it’s very well measured.

While it may not be amongst the year’s best, The Expendables 2 triumphs by providing a light-hearted and thoroughly entertaining experience, particularly for big fans of Schwarzenegger and Stallone. You could argue that the daftness is unintentional, and that it works as a cheeky eighties action flick rather than a straight revenge thriller, but if you take it as the former instead of the latter you’ll come out quoting.

The first Expendables movie can be found on movie streaming services such as Netflix and LOVEFiLM. If you would like to stream on your iPhone 4s then make sure you download the free apps which are available on any app stores.