Award-winning writer and director Martin McDonagh returns this week with the weight of expectation falling upon his difficult second feature, hoping to emulate both the critical and commercial success of debut film In Bruges (2008). Colin Farrell returns to the fold, this time as a cipher for McDonagh himself, a talented screenwriter struggling to find inspiration in the decadent surrounds of the Hollywood Hills. His own sharp-witted sensibilities remain intact, but by implementing a tricky ‘film within a film’ meta-narrative, comedy thriller Seven Psychopaths (2012) looks destined to splinter opinion – whist alienating any potential female demographic.

Farrell plays alcoholic writer Marty, struggling to come up with ideas for his latest unwritten screenplay – itself entitled ‘Seven Psychopaths’. Hindered rather than abetted by his dog-napping best friend Billy (Sam Rockwell), our consistently pissed protagonist soon finds himself embroiled in a very real game of cat-and-mouse after his unpredictable sidekick steals the beloved Shih Tzu of local mobster Charlie (Woody Harrelson). With Billy’s philosophical partner in crime Hans (Christopher Walken) in tow, the trio flee to the desert to brainstorm Marty’s future narrative – as well as their own. 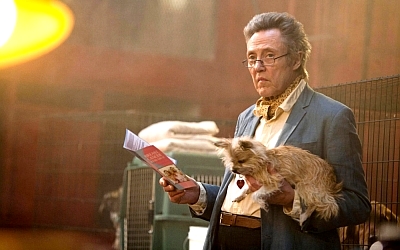 There’s little denying the fact that McDonagh has collated for himself an impressive male cast for his violent, sophomore black comedy, with the four central leads all fulfilling the roles laid out for them with skill beyond mere competence. Farrell – whilst asked to play a character substantially less interesting than the haunted hitman of In Bruges – bounces well off the mentally unstable Rockwell, with a resurgent Walken (how we’ve missed his strange, almost alien charm) picking off the film’s best lines in his own inimitable style. Harrelson is also decent as the Shih Tzu-loving gang boss Charlie, handing out moments of cold menace as capably as farcical comic idiocy, on most occasions.

Unfortunately, for a film so willing to subvert convention and embrace Tarantino-esque post modernity, it’s a shame that certain misogynistic undertones threaten to derail proceedings. Despite a knowing line from Hans in Seven Psychopaths’ final third – berating Marty for his inability to write believable female characters – this moment of intentional self parody highlights McDonagh’s most prevalent flaw. Abbie Cornish is practically non-existent as Marty’s long-suffering partner, given no right to reply in the face of vitriolic hostility. Hans’ hospital-bound wife, though slightly better rounded, is similarly given little or no time to make even so much as a ripple in a sea of machismo.

With Seven Psychopaths, McDonagh has mostly succeeded in crafting a funny, self-reflexive comedy thriller, yet fails to upturn the male-dominated cult of Hollywood when held under closer scrutiny. His projected follow-up, reputedly featuring a strong fiftysomething female protagonist, may well serve as McDonagh’s very own repost to such gender-based criticism. For now, McDonagh and co. seem more than content within their own fictional universe of homicidal maniacs and manly bonding.