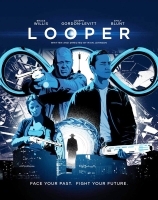 Rian Johnson’s Looper (2012) is a high concept adventure that imbues classic sci-fi elements with an understanding of smart storytelling. However, despite his ambitious and stylish amalgamation of themes, Johnson’s third film is as occasionally impressive as it is underwhelming. A director with a penchant for coalescing reality with fantasy, Johnson’s previous excursions have seem him infuse elements of film noir into a high school setting in his outstanding debut Brick (2005), whilst his 2008 follow-up The Brothers Bloom merged the playfulness of 1960s detective films with the interplay of a heist movie.

With Looper, Johnson has pushed himself even further, creating a dystopian thriller set in the year 2044 where a collective of young reprobates called ‘loopers’ are hired to assassinate targets from the future thanks to the invention of time travel. However, each looper must eventually end their ‘loop’ by murdering their own future self, thus removing any evidence of their previous transgressions. Joe (Joseph Gordon-Levitt) is one of these loopers, yet when his contract expires and he’s faced with his future self (Bruce Willis) he hesitates, culminating in his future self’s escape and triggering an unusual cat and mouse pursuit where the hunter literally is the hunted. 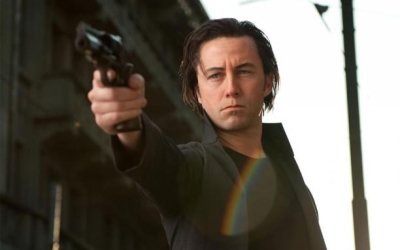 Through his tantalising premise, Johnson has undeniably produced some inventive and smart set pieces – no more so than the horrific, yet genuinely inspired moment where an older looper finds his extremities vanish before his own eyes. However, its merely an example of a magnificent scene in a mediocre film – albeit one that teeters so precariously on the edge of greatness. Johnson’s film suffers from the same curse that befalls most time travel films, in that its fragile premise is always likely to come undone under closer scrutiny. The trick, as seen with films such as Terminator 2 (1991) and Twelve Monkeys (1995), is to create a distillation of your idea, simple enough to follow, yet captivating enough that your audience is prepared to come along for the ride.

Johnson accomplishes this delicate balance until the final third, where this already complex concept becomes convoluted beyond the point of curiosity when the theme of telekinesis is further development (told through a child cursed, with supernatural powers, who appears to have been sourced from the Omen school for creepy kids). Up until this point Johnson’s pair of ambiguous heroes generate a fascinating illustration of a man pitted against his former self – creating a sublime metaphor for the inherent desire to change your own past and the decisions you made in hope of a brighter future. However by negating this premise in favour of a flurry of special effects and a superfluous romantic subplot the film squanders its previously well-earned admiration and illuminates its numerous imperfections.

Ultimately, Looper is an uneven yet entertaining experience that whilst relying far too heavily on over familiar genre tropes should be commended for never patronising its audience. However the film’s jarring final act can’t be ignored and sadly results in a film that whilst reminding you of what made these now tiresome tropes so popular in the first place, feels like an unremarkable and disorganised attempt at resuscitating the genre.

Win a Blu-ray copy of Rian Johnson’s Looper with our latest competition. Follow this link to enter.