Nick Love’s loose cinematic revival of 1970s British TV show The Sweeney (2012) may boast the kind of technical flash and aesthetic sheen one might expect from a US studio action picture, but it unfortunately retains the grimy geezer stylings of all his previous work. There is no doubt Love has grown in confidence; his direction is tighter than before and he demonstrates a more prominent degree of control over the material. It’s a shame that the writing can’t keep up and is, as ever, hindered by Love’s reverence for criminality; imbuing the myriad acts of vigilantism on display with an inexplicable sense of romanticism.

Regan (Ray Winstone) and Carter (Ben ‘Plan B’ Drew) work for the ‘Sweeney’, a division of the Metropolitan police who break up armed robberies with their controversial tactics. They are men under fire; the job is dangerous and their pen-pushing superiors, tired of their unorthodox policing methods, are determined to find evidence of their misconduct and shut them down. After a jewellery heist results in a random woman being executed, all signs point to arms dealer Allen (Paul Anderson), Regan’s nemesis from years previously. 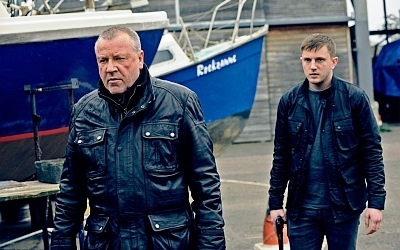 The typically pedestrian plotting on display here is helpfully elevated by dynamic pacing and a driving score. Love, best known for his 2004 hooligan drama The Football Factory, also demonstrates a decent grasp of action scenes, with a Michael Mann-style shoot-out taking place in London’s Trafalgar Square proving a mid-point highlight. The problem is that The Sweeney’s technical clarity highlights just how inept the writing is. The script is made up entirely of laughably didactic exposition, sneering sexism and cliched police film one-liners. Indeed, there are moments when Love’s supposedly ‘hard’ thriller skirts perilously close to the kind of hackneyed tropes Edgar Wright’s Hot Fuzz (2007) parodied so well.

While it’s arguable that underwritten dialogue goes with the turf with this kind of film, the issues are exacerbated by Love’s celebratory approach to criminality and regressive masculinity. The Sweeney treats men who enjoy violence like misunderstood outlaws and treats any kind of process or reason with splenetic disdain. While 70s thrillers like The French Connection (1971) may have featured similarly distasteful characters, they excelled in their probing nihilism and were notable for chipping away at the dark recesses of the human soul.

Sadly, Love’s The Sweeney displays no such nuance; it has all the insight and sophistication of a tabloid editorial, revelling in its retrograde attitudes and justifying them on the grounds of authenticity and broad-brush morality. What frustrates most is perhaps the underlying fact that Love is capable of being so much more than yet another bravado hack.