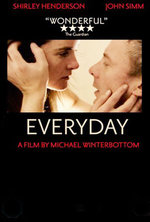 One thing can be said for sure of prolific British director, Michael Winterbottom: he certainly likes a challenge. His latest is Everyday (2012) which, with its stripped back, grittily realist approach, presents a quietly moving, slow-paced tale of working-class life. Set over the course of five years, we find con Ian (John Simm) jailed for an undisclosed crime, inferring only that it must be reasonably serious for him to serve a five-year sentence. He leaves his family on the outside, including wife Karen (Shirley Henderson) and their four young children, played by the Kirk siblings with a hushed grace as they sing in school and eat cereal.

We only engage with Ian when the family go on their visits to the prison. It’s in the struggling life of Karen that we find the film’s drama, as she struggles to raise her kids without a father/husband. We later find Ian on day release. The family have their day out and we watch hungrily as the family are reunited, in the full knowledge that this moment is as fleeting as every day that passes. As we trundle through the years, we occasionally catch some of Ian’s prison life – the loneliness and frustration Simm’s character faces – but for the majority the focus is on the family. 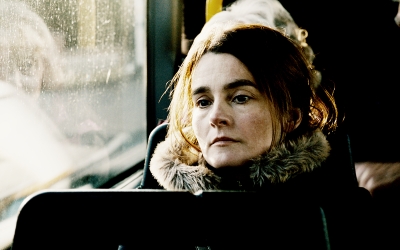 Winterbottom also depicts numerous coach trips, be it to the school or the prison, travelling through the Norfolk countryside. These pastoral interludes are absent of any romanticism, the greying fields (much like the cast) captured with a washed out look and feel that speak of daily troubles amidst wider problems. Henderson, with her red raw eyes, tattered and tangled hair, encapsulates this tone. She tucks in her children at night, buys shopping and, in a moment of weakness, finds solace in another man. Importantly, Everyday also tackles head on the sexual tension the husband and wife feel. They are presented as incredibly human, with a tangible urge for physical contact.

Winterbottom’s raison d’etre here isn’t to create a tense, kitchen sink drama of high emotion forcing the tears from our eyes. It’s something far more graceful, but ultimately more protracted. There are no moments of grand drama. Instead we have a reflective, simple narrative that exhumes the daily trials and tribulations in this family’s life. At times, it almost feels like a prosaic documentary rather than fiction. Only Michael Nyman’s ear-wrenching score, with its high pitch squeals, reminds us of the film’s fictional nature, drawing us out of the moments and detracting from the well-crafted performances and bare-bones cinematography.

Ultimately, Everyday is a tale transfixed with thoughts of being human – not in a grandiose, philosophical way, but in an honest almost pedestrian way, that looks at a family facing problems and dealing with what life has thrown at them. It won’t be to everyone’s taste, but Winterbottom must be commended for having the bravery to make a film that isn’t afraid to be slow, isn’t afraid to not have a profound message, but just speaks quietly and honestly to contemporary Britons.