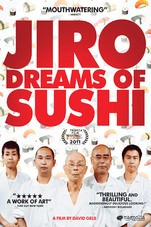 David Gelb’s study of one of the greatest living sushi shokunin, Jiro Dreams of Sushi (2012), may appear like an unnecessary documentary to appear amongst the winter schedule. However, behind this elegantly composed study of Japanese culinary culture lies a heartwarming tale of empathy and a serene meditation on contemporary values. At 85 years old, Jiro Ono is as sprightly an octogenarian as you’re ever likely to meet – not that his sobering attitude whilst working would lead you to such a conclusion. He’s worked as a sushi chef for over 70 years,wholeheartedly believing that the secret to a blissful life is dedicating yourself to mastering your art.

Jiro’s two sons have also followed in his footsteps. Yet any notions they may have of usurping their father’s position as the head chef of his three Michelin star restaurant (the highest honour awarded in the culinary world), will have to wait – with Jiro so galvanised by his work that he looks like a man who could continue well into his centenary year. Director Gelb gives us an insight not just into the man behind this revolutionary restaurant (which despite its lofty status still only has ten seats, with a month-long waiting list to match), but also subtly unearths the true meaning of perfectionism. 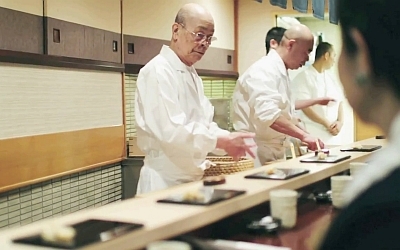 This softly spoken biopic of a true artist is unique for finding an individual unaffected by superfluous fame or blinded by the pomp and ceremony of today’s cultural phenomenon. Fittingly soundtracked by the elegant, lilting harmonies of Bach, Tchaikovsky and Phillip Glass, Jiro Dreams of Sushi distils the art of creation to its bare bones, purifying the love, commitment and passion which goes into creating something truly extraordinary. As is to be expected, the film is besieged by a conveyor belt of delectable visuals, utilising slow motion montages to present us with a mouthwatering selection of Jiro’s creations, with the food on show laid out like glistering gems – each one teetering on the edge of perfection.

More than just a highbrow documentary on the eating habits of the elite, Jiro Dreams of Sushi also acts as a window into contemporary Japanese values. Gelb highlights just how the ethics of previous generations are passed along through the blood lines, culminating in a country that whilst seen as a pioneering force in originality and ingenuity remains strong to its historic roots. Jiro’s hunger to be the best also poses the question of whether the impossible is possible; namely, is it every achievable to reach the top of your chosen profession, or does such an accolade simply mean you’ve run out of ideas?

Commendably, Gelb’s film doesn’t forget to highlight the issue of sustainable fishing (a genuine professional threat to Jiro and his family). However, even this vital message is somewhat diluted by the sheer uplifting aura which surrounds this decidedly gentle film. Jiro Dreams of Sushi may seem like a film that demands an educated palette for seafood to be enjoyed, however this sumptuous study of art, creation and inner happiness is a taste we should all try to acquire.